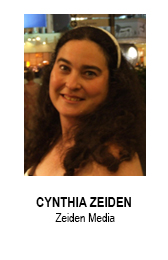 Cynthia Zeiden was born and raised in Chicago. Her entire career has focused on non-commercial and educational media through her work in Public Television and the National Academy of Television Arts and Sciences. After graduating with a Masters degree in Broadcast Management from the University of Tennessee, Cynthia became the Director of Broadcast Operations at WYCC-TV, a PBS station in Chicago owned and operated by the City Colleges of Chicago. In this role, Cynthia’s work was Emmy® Award-nominated multiple times. During that time, Zeiden taught a film class through the Center for Open Learning out of Harold Washington College. She then moved to

San Francisco to assume the role of Program Manager at KCSM-TV, a PBS station in San Mateo owned and operated by the San Mateo Community College District. This was when Cynthia first became involved with NATAS and was elected as a Governor of the San Francisco/Northern California Chapter. She then became President of the chapter, then National Trustee and now is beginning her third term as a Trustee. For the last 13 years, Zeiden has served as the Activities/Programs Chair, focusing on programs about social media and new technologies via live events and webcasts and more recently began to serve as the Advanced Media Task Force Chair for the chapter working under the Awards Committee. Cynthia has had her own company, Zeiden Media, for the last 12 years, she develops, produces, acquires and markets programming for PBS stations around the country.