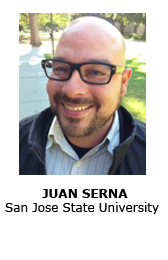 Juan Serna is an experienced video producer with over fifteen years of experience.  He is creative, client focused and a team player. Juan is a producer, director, editor, cinematographer and man of many talents.  He is artistic with a sense of visual style and most importantly he says -”I get the job done”. For the last five years, Juan has worked at CreaTV San Jose, a community access television studio and media training center, overseeing television and video productions as well as training members in the craft of television production.  Juan has a B.A., Radio Television and Film, Minor in Theater Arts 2007 from San Jose State University.  He has been awarded the Brian Wilson Mentorship Award, The Western Access Video Excellence Award and Visual Arts: Star Trek @ the Tech, National Hometown Video Awards.