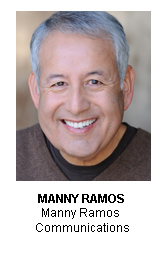 Manny Ramos has spent more than 30 years in television news and has been a member of NATAS even longer.  His career began as a production assistant at KNTV in San Jose and then as an assignment editor, producer, writer and reporter at KOVR in Sacramento and Stockton.   He left Sacramento when he was hired as a reporter for KRON in San Francisco.  Manny spent more than 20 years working at KPIX now CBS5, first as a morning anchor then as the South Bay Bureau Chief and a reporter.  He finished his on-camera career as a correspondent for California Heartland, the PBS series produced by KVIE.  Currently Manny is a Masters instructor at the Academy of Art University in San Francisco where he teaches on-camera technique and interviewing in the multimedia communications department.

He was awarded 6 Northern California EMMYs in 5 different categories.