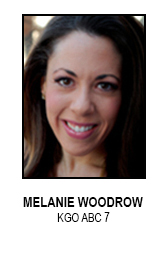 Melanie Woodrow joined KTVU as an Investigative Reporter in April. Previously Melanie reported for CBS Newspath and CBS2/KCAL9 in Los Angeles. Twitter and other online media publications featured Melanie as a best practices journalist for live tweeting during her investigation into human trafficking. In September 2012, Melanie joined the nationally syndicated television show The Doctors as the show’s first ever full time Investigative Reporter. Melanie’s investigation of a dangerous children’s toy resulted in a voluntary recall.  While at WAVY, Melanie was honored several times for her work as an investigative reporter. She got her on-air start as a Morning Anchor/Reporter at WHAG in Maryland.