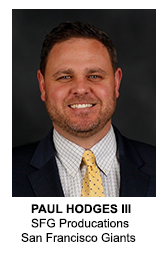 Paul Hodges III serves as Vice President of SFG Productions Hodges III serves as Vice President of SFG Productions for the San Francisco Giants. SFG Productions, the department Paul manages, is responsible for all digital signage in-park and external video content created and distributed by the organization. With 18+ years Sports Entertainment experience, Paul received his degree in Broadcasting and Electronic Arts from San Francisco State University and began a career with the San Francisco Giants. In July 2014, he joined the Golden State Warriors as the Senior Executive Producer, before returning to the Giants. He has won 10 Northern California Emmys in the last 6 years, in addition to the 4 Championship Rings between the Giants and the Warriors respectively.