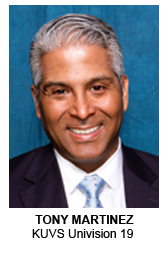 Tony Martinez is the Assistant News Director at KUVS Univision 19 in Sacramento. With 25 years of experience in the production of newscasts in the United States. He graduated in 1991 with a B.A in Journalism & Broadcasting from the University of Texas at El Paso. He has worked in three of the main Spanish networks: Univision, UniMas and Telemundo.  His work has taken him to major television markets like Los Angeles, Chicago, Miami, Dallas and Sacramento. Tony helped launch and produce the national network newscast “En Vivo y Directo” with Carmen Dominicci. Also Tony launched a different and original newscast in Chicago called “En Contexto”. He has experience in creating new program formats for news and he was the Executive Producer of Noticias 19 Univision in Sacramento where he produced the weekly statewide half hour public affairs program “Conexion California”. Tony has been the recipient of twelve of the very coveted Emmy® Awards in different areas: News reporting, Interview/Discus- sion Program Especial, Breaking News, Station Excellence and many more. He was also honored with the Peabody Award, Edward R. Murrow Regional Award for Over- all Excellence, the AP Television & Radio Association Impact Award, The Golden Mike for the Best Newscast (RTNA) and the GLAAD award 2016 for Outstanding Local TV Journalism (Spanish Language)  Currently Tony is the Executive Producer of Univision 19 in Sacramento and produces Conexion California, a political show that airs in all of the Univision stations in California.