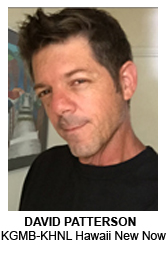 David Patterson is a 2-time Emmy® award winning news producer in the Honolulu market. He currently produces for Hawaii News Now (CBS and NBC). David has worked and lived in Honolulu since 1991. Originally from the San Francisco Bay Area, where his grandfather was an active member of NATAS and one-time General Manager of KGO. David’s first job in TV news was at World Monitor Television, a nightly news program on the Discovery Channel based out of Boston. David has also worked as a marketing professional, college teacher and was even a men’s college basketball head coach at his alma mater, Principia College in Illinois. He has four children, four grandchildren, a step-son and is married.