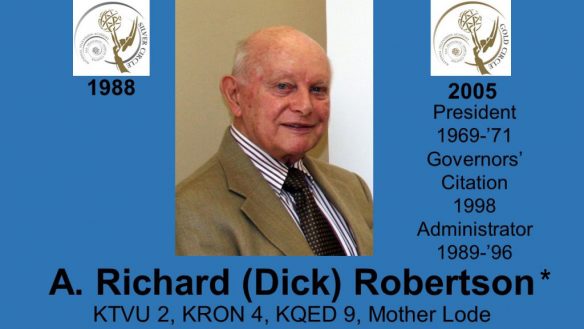 A. Richard (Dick) Robertson began his broadcasting career at KSL-TV in Salt Lake City in 1951. He remained there until 1956, when he took a job as the Advertising Manager for Television Age Magazine in New York City. In 1958 he became the Promotion Manager for KTVU in Oakland. A year later, KRON stole him away, and he remained at 4 for 18 years, until 1977.

That’s when he followed his wife, LaNore, to Flagstaff, Arizona, where she had obtained a professorship at the Northern Arizona University School of Dentistry. Dick became a professor in the university’s communications program, teaching journalism and public relations courses.

In 1979 Dick returned to the Bay Area, and worked for three years as KQED’s Director of Corporate Communications, before starting his own firm, Mother Lode Communications. For fourteen years he and his second wife Rose produced the Comedy Day Celebration in Golden Gate Park.

When he “retired” in 1996 he moved to Gold Country, and subsequently became the marketing manager for the Tuolumne County Film Commission, attracting film, TV commercials, and documentaries to the scenic foothills. Even now, in his second “retirement,” he did publicity work for his homeowners association in Henderson, Nevada.

Dick has served as the NATAS Chapter President, Executive Director, and represented us as Chair of the San Francisco Ballot Simplification Committee. He’s a past president of the Broadcast Promotion Association, the Sales Promotion Executives Association (NorCal), and has served on the boards of too many organizations to list here.
As well as in Arizona, Dick has taught at Golden Gate University, and at San Francisco and San Jose State.