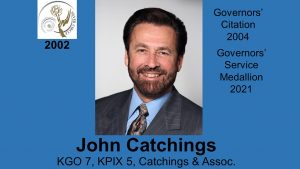 JOHN CATCHING’s career in broadcasting started in radio serving first as a disc jockey at San Francisco’s KMPX in 1964. At KFRC in 1966, John reported news and sports plus hosted a weekly talk and music show. In 1972, he joined ABC, serving as program director for their FM station, KSFX. He moved to the television side in 1977, joining KGO-TV where he remained for 13 years, serving first as an assignment editor and later as executive producer for the 11 p.m. news. There he gained the reputation of being the person to go to when you wanted it done right. He also served as interim news director. KPIX became John’s home in 1990, working first as executive producer for KPIX sports, then as director of local programming and production and, ultimately, as the station’s operations director. John started his own consulting firm last year and also produces the “Bay to Breakers” and San Francisco 49’ers pre-season games. John is a member of the Board of Governors of NATAS serving as Membership Chair and Archive and Museum Co-chair.