NATAS SF NorCal Cinema Club verité is a monthly benefit to Chapter members with illuminating and educational interviews with filmmakers. 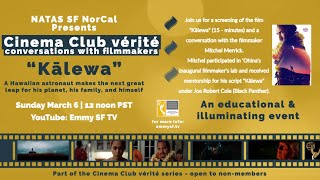 Cinema Club vérité presents a screening of the film “Kālewa” (film trailer), a conversation with the filmmaker Mitchel Merrick, and dozens of behind the scenes pictures of the production..

Born and raised in Hawai’i, Merrick is a filmmaker who first developed his passion making home movies with the Sony camcorder he received as a birthday present when he was 10. After receiving his Bachelor’s of Media and Creative Technology from the University of Waikato in Aotearoa, he returned home to continue developing his craft.

He had the honor of participating in ‘Ohina’s inaugural filmmaker’s lab and received mentorship for his script “Kālewa” under Joe Robert Cole (Black Panther). “Kālewa” received the Greenlight Award from ‘Ohina along with full funding to be produced, then went on to screen at dozens of festivals around the world.

Since “Kālewa” (2018), he has produced a handful of other shorts, a feature film “Water Like Fire” (2020), and continues to work on elevating Hawai’i-centered stories through film.

We will be screening the 15-minute film, however you can screen it before the event: “Kālewa” 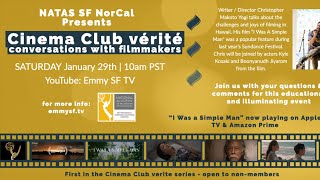