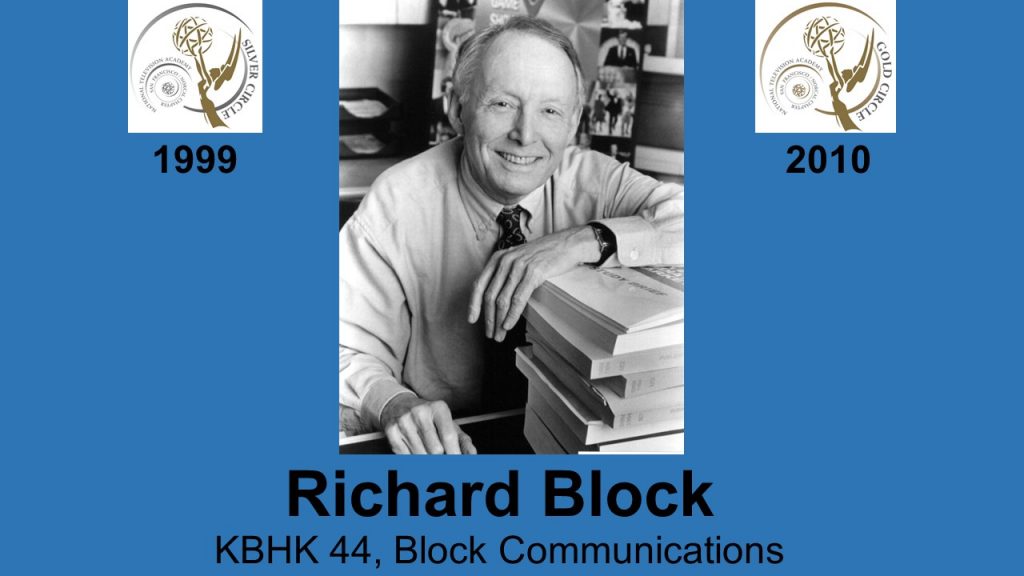 One of broadcasting’s pioneers, Dick started his career after graduating from Stanford in 1953. He was on hand to witness and help launch (in different capacities) many television stations in Northern California. In 1955 Dick worked at KCRA Sacramento where he was the Promotions Director. Two years later, he joined KRON in San Francisco, as its Promotions Manager. In short order, his reputation as a “young man who could get things done,” earned Dick a General Manager’s position at KHVH Hawaii. During his long and successful tenure with Kaiser Broadcasting, he was quickly promoted to Vice President and General Manager of its Broadcast Corporation headquartered in Oakland. As President of Kaiser Broadcasting, he conceived and executed a plan to build independent TV stations in seven of the top ten markets and was at the forefront of the establishment and expansion of Kaiser Broadcasting’s UHF division, including the startup of San Francisco’s own KBHK as well as WKBD (Detroit), WKBS (Philadelphia), WKBG (Boston), WKBF (Cleveland), KBSC (Los Angeles) and WFLD (Chicago). He left Kaiser Broadcasting in the mid 1970s. Block was the Executive Vice President of Metromedia, which was ultimately bought out by FOX. He was also instrumental in the creation and launching of The Travel Channel for Westinghouse and Game Show Network for Sony. Dick lives in Southern California and is President of his own consulting business based in Santa Monica, Block Communications Group, Inc. The firm’s expertise is focused on domestic and international projects in broadcasting and cable with an emphasis on distribution, marketing, management, programming, production and new ventures. Clients include major broadcast and cable networks and systems, new technology companies, TV stations, major studios, publishers, producers and trade associations. In 2002 The Tournament of Roses, which brings the annual Rose Parade to worldwide audiences, appointed Block to the position of Director/Rose Parade International TV Services, to focus on worldwide distribution of the annual New Year’s Day event. Block has taught at Stanford, UCLA and, since 2007 “TV Station Management” at USC. Over the years, Block has also testified before numerous congressional committees and served as an expert witness. Board memberships include the National Association of Broadcasters, the Association of Independent TV Stations, the TV Bureau of Advertising, the Broadcast Education Association, the National Committee for Employer Support of the Guard & Reserve, the Stanford Alumni Association and Easter Seals of Southern California.
Dick continues to be involved in Northern California television and the Academy. He has several clients in Northern California and Hawaii and has been involved in various NATAS events including: Silver Circle Luncheons; the NATAS 50th anniversary celebration and the NATAS / NAPTE student career workshop events. In fact, Dick’s major community involvement has been with the NAPTE (National Association of Program Television Executives) Educational Foundation which offers student career workshops around the country. For each workshop Dick contacts the local NATAS chapter to be a co-sponsor (at no cost) of the event. The San Francisco workshop was in 2008 at KPIX. Dick has also been a regular contributor to the TV Academy Scholarship Fund and is a
member of the Silver Circle Class of 1999.