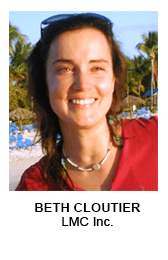 Beth Cloutier is a Producer/Director/Director of Photography whose work is included permanent museum collections and has been a part of award-winning TV, commercial and documentary productions. Beth’s credits include the feature documentary “Stranger Fruit”, one of the top ten films in SXSW 2017 and now showing on STARZ, “The Advocates” playing across the country in select theaters, “Borderline” now on Amazon and “Suitcase of Love and Shame”. Beth’s television series work has been for CNN “The Sixties”, PBS three-part TV series “A Path Appears” and the PBS online series “Not In Our Town”, A&E “Breakout Kings”, Discovery Channel “Bounty Wars”, Food Network’s “Chopped” as well as the “Restaurant Divided” pilot, which became a multi- episode TV series. Beth is the founder of the online music video series Local Music Channel.

Beth teaches cinematography workshops around the country and has been an adjunct professor at Emerson College. (www.bethcloutier.com)