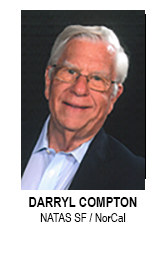 Darryl Compton, has worked in broadcasting for over 55 years.  He is the Executive Director of the San Francisco/Northern California Chapter, and a member since 1974.  He has served the Chapter as Trustee, President, Vice President, Treasurer, Awards Chair, Governor and is a member of the Silver Circle class of 1995.

Darryl currently serves as the executive director of Broadcast Legends, president of Media Bridges, as well as treasurer and director of The Pear Theatre in Mountain View.  In addition he still has time for some freelance producing and directing.  He received an Emmy® award for the 1996 “Bay to Breakers Highlight Show” for KPIX, San Francisco.   He has also produced and directed “Silicon Summit: Will Technology Affect the News?, ” (a three hour round-table edited to seventy five minutes for the Radio-Television News Directors Foundation);  and coordinated the media pool coverage for the executions at San Quentin State Prison.