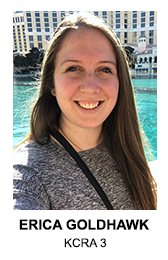 Erica Goldhawk is a TV news producer at KCRA in Sacramento, California. She began her career in 2015 as a producing intern at KCRA, after years of learning at school journalism programs. Working for college credit, she took this real-life experience and absorbed the techniques and tips being passed on by everyone on staff.

By the end of 2016, Erica took a part time job as a multimedia producer at KCRA, while still going to UC Davis full time. In a year, she learned the skills needed for different parts of the newsroom, like producing sports, being a digital producer and working on the assignment desk. However, the goal was always producing for TV.

While she was wrapping up her college degree, she took a full-time job as a producer at KCRA. Erica had the opportunity to enhance the skills she spent the last 3 years working on. As a producer, Erica has produced every single newscast KCRA offers, along with live and taped specials ranging from elections, officers’ funerals, Olympics Countdown and Oakland Raiders preseason specials. Erica also spent a week at a sister station in West Palm Beach assisting with their continuous coverage of Hurricane Dorian.