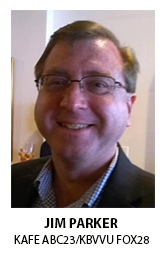 In January 2022, Jim joined KIEM-TV and KVIQ, the NBC and CBS duopoly in Eureka, as News Director. He will also oversee news operations at KMVU, the Fox affiliate in Medford, Oregon.

Jim last served on our Board of Governors a decade ago, when he was Director of Digital

Operations at KPIX 5 in San Francisco. He has also held digital director roles for television stations in Indianapolis, Washington, D.C., and Portland, and his most recent stop, in El Paso,

Texas. Additionally, he has served as an executive producer in Philadelphia and served as a news director for stations in Iowa, in Des Moines and Sioux City, as well as in Rock Island, Illinois and Binghamton, New York.

Previously, Jim taught communications and journalism courses at the  Academy of Art University in San Francisco and at the University of Oregon.

He has published works in the Federal Communications Law Journal.