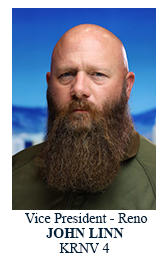 In the short time I have been in news I’ve been blessed with a rich career filled with
opportunity both personally and professionally.
I grew up in a family of journalists so, of course, never planned on being one myself.
Several years ago, after about a decade in youth services and juvenile justice, I
realized that the press is where I belonged despite my best attempts to avoid it.
Over the past several years as my responsibilities have increased at my station, I
have done my best to mentor and encourage those who have come after me. I
believe our highest calling as we advance is to serve and give back. That is why I am
applying to be a member of the NATAS SF/NorCal Board of Governors.
I hope to serve not just my station or the people in my market, but the industry as a
whole. I believe due to my short time in the industry, and being in a middle market, I
will bring a different perspective to the Board than many others would. Participating
in the Mentor Match video and judging over the past year has been a good
beginning, though I feel I can offer (and owe) more to the industry that has been
such a large part of my life and has given so much to my family and me.