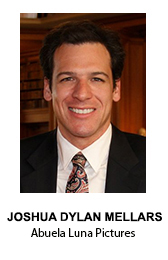 Joshua Dylan Mellars is a television producer at Northern California Public Media, which operates PBS station KRCB in the North Bay and public television station KPJK in the South Bay.

He hopes to continue bringing his professional experience in the Bay Area, in the US and internationally to the important work that the San Francisco/Northern California NATAS chapter does in honoring and supporting television and media professionals as they strive for excellence.

Joshua was born in San Francisco and grew up in Marin and Sonoma counties. During his six years at Northern California Public Media, Joshua has produced a variety of local television work, garnering six San Francisco/Northern California Emmy® Award nominations. He has also contributed to NHK World-Japan’s environmental series “Zeroing In: Carbon Neutral 2050.”

In addition to his work at Northern California Public Media, Mellars also continues to produce and direct films through his own independent production company Abuela Luna Pictures. His independent drama Shakespeare in the Shadows and Indian classical music documentary Play Like a Lion are currently airing on PBS stations nationally.

The filmmaker’s music documentary trilogy includes: Play Like a Lion, Tango Illusions and Portuguese fado film Heaven’s Mirror. The three documentaries have screened at a variety of venues throughout the world including the Asian Art Museum of San Francisco, the Indian Embassy to the US in collaboration with the Smithsonian, the Portuguese Embassy to the US, Oxford, Cambridge, and international film festivals from New York City to London, Los Angeles to Berlin, Miami to Vancouver.

Joshua’s independent film My Uncle Bobby—about the fateful night a Vietnam War veteran stepped on a land mine during a recon mission just south of the DMZ—premiered at London’s Portobello Film Festival. Stolen Youth: Political Prisoner of the Dictatorship—concerning the eight-year struggle of an Argentine political prisoner—premiered at the Mill Valley Film Festival. His Robert Louis Stevenson homage The Land of Nod, filmed in Portugal and the Bay Area, premiered at the Newport Beach Film Festival.

Prior to television production and independent filmmaking, Joshua was a news correspondent for seven years in Venezuela, Argentina and Brazil where he filed stories for UPI, NPR’s Marketplace, the BBC and Bridge News wire service. He is a Brown University graduate.