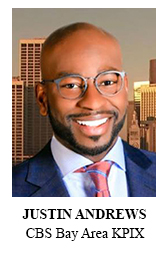 Justin Andrews’ first reporting job was in Kirksville, Missouri, where he was promoted to weekend evening anchor within days of his arrival. He then moved to the Hawkeye State of Iowa. Justin was the lead nightside reporter and later became the weekend night anchor at KWWL. Justin then spent more than 5 years at KMOV in St. Louis, Missouri as the lead morning reporter and fill-in anchor. Justin’s compelling live reports and direct style has gained him national exposure including live reports on CNN, CBS This Morning and HLN.

Currently, Justin is a morning reporter for CBS News Bay Area, KPIX-TV in San Francisco, CA. Justin has already covered the trial of Elizabeth Holmes, several mass shootings and a plethora of other major stories. From covering wildfires to tornadoes, protests to recalibrating state policy changes – Justin has covered it all.

For more than ten years, he’s been telling the stories of people who felt theirs were untold! To Justin, being a television journalist allows a community’s problems to be placed on platforms. It births conversations, demands change, recalibrates racism, and injects injustices with integrity and impartiality.