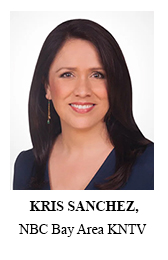 I am proud to say that I just celebrated my 25th anniversary as a working journalist. I’ve spent the last 18 years working for KNTV, NBC Bay Area as a reporter and anchor, mostly for our early morning newscast, “Today In The Bay.”

I also report for Telemundo Area de la Bahia, delivering reports in Spanish, and produce relevant and accurate news content for our social media platforms. Previously, I anchored and reported at KGPE in Fresno, KVIA in El Paso, Texas, and KJCT in Grand Junction, Colorado. I also worked as a correspondent at Channel One News, which delivered current events newscasts into 8 million middle and high schools across the country.

I am a graduate of the University of Texas at Austin’s School of Journalism and have bachelor’s degrees in journalism and in Spanish Language. I grew up in Colorado, where I was born, Venezuela and Texas.

I live in the South Bay with my husband, a fellow journalist, and our two California-born daughters.

It is a tremendous responsibility and a gift to deliver the stories of our communities and to provide reliable information to help people make the best decisions for themselves and their families.