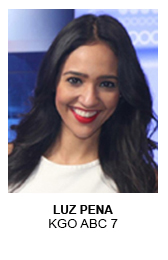 Luz Peña is an Emmy® award winning Video Journalist reporting for KGO ABC 7. She started her career at 22 years old reporting for the national broadcast network, MundoFOX. Before long, her passion for storytelling and fluidity on-camera made her a perfect fit for her own TV segment focused on informing the Latino community on technology and social media. She was named one of the top 40 Latino journalists in the US by the Huffington Post. Luz also worked with Fox Deportes as a host for the Buzzer and averaged 2 million views per week. She moved on to KDTV Univision to a video journalist in this top market. She’s focused on merging multimedia journalism and Latino affairs. When asked why she would like to be on the NATAS Board of Governors, Luz says she brings a “fresh perspective and a millennial flare that’s important to reach an ever changing young generation”.