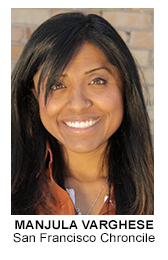 Manjula Varghese is a two time Emmy® award winning   documentary filmmaker and visual journalist. Manjula broke into the documentary world as the lead cinematographer and producer on ‘Reserved to Fight,’ a documentary that followed reservist marines reintegrating back into civilian life. The film was an ITVS Open Call recipient and went on air in 2008 on PBS Plus.  In 2017, she received her graduate degree from the Berkeley’s school of Journalism with an emphasis in new media storytelling.  Her master’s thesis was an interactive documentary called “Who We Are,” which allows the users to explore Egyptian identity through various vignettes captured during the Arab Uprising from 2011 to 2017. Her project won the Susan Rasky Award for Journalistic Excellence in Political Reporting in 2017. After receiving her degree, she joined the San Francisco Chronicle video team where she recently won a regional Emmy for her visual work at the paper. Prior to the Chronicle she was a video fellow with the KQED Arts an NPR affiliate creating online digital content as well as with the New York Times video department. She is passionate about documenting stories of social injustice in the community as well as sharing stories of disenfranchised and marginalized communities.