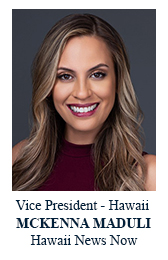 McKenna Maduli is the creator and host of Talk Story with McKenna Maduli, a weekly Hawaiian variety show on Hawaii News Now in Honolulu. The show celebrates all things entertainment and shines a light on the many talented people who come from the islands in music, fashion, art, hula and the Hawaiian culture.

After three years in San Francisco at Foothill College, McKenna moved to Los Angeles to pursue the Broadcast Entertainment program at UCLA Extension. She was an entertainment reporter for NBC’s Access Hollywood, MTV, VH1, and Billboard Magazine’s “Billboard Live”.  McKenna moved back to Hawaii in 2016 and joined KHON2 (FOX) as the Weekend Weather Anchor and morning news reporter on WakeUp2Day. She moved on to HNN as Local Content Development.