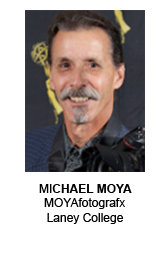 In 2008 Michael was hired as instructor of record to develop and teach the Professional Photography Program at Laney College.  As a vocational program Michael’s curriculum is based on lighting and camera capture. Currently, Michael along with the collaboration of Laney’s Media department co- teaches HDSLR workflow for cinema & still photographers. Using the movie capabilities of the DSLR camera based on camera capture and lighting.

Michael also volunteers as photographer for the San Francisco NATAS Emmy Awards and the Gold & Silver Awards. He also assisted with the NATAS master lighting class