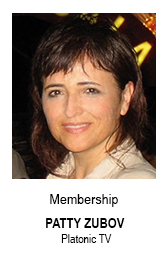 Patty worked in New York City from 1985 to 1990, as Talent and Audience Coordinator for in-studio national TV programs, Live Event Coordinator (such as televised concerts in Central Park), and Location Manager for films and TV.

She began her television career in San Francisco as Management Trainee at KPIX with the live daily talk show “People Are Talking” – then continued to work as Associate Producer of “Yan Can Cook” at KQED.

Nominated for 2 Emmy® Awards; Winner of 4 Telly Awards, 1 Joey Award, and the 2012 Silver Award of Distinction – Documentary – from the International Academy of the Visual Arts (IAVA).