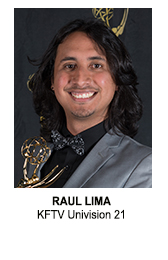 Raul Lima is the director/technical director for Univision Fresno KFTV 21 in the news department. Before joining news, Raul worked in the Engineering department in 2011 as a Master Control Operator.

His carrier started in 2004 working for local Fresno NBC affiliate KSEE 24 and part-time in video production for the Fresno Grizzlies baseball stadium as a director, instant replay-op, and on-field camera-op.

Raul has a passion for technology and storytelling, which have helped him become a six-time Northern California Emmy® award recipient in varies categories including live director and as an editor/photographer