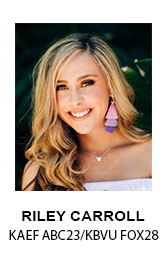 Riley is a multimedia journalist for KAEF ABC23 and KBVU FOX 28, Eureka.

During her time in school, she interned at CBS Daytime Television and Entertainment Tonight. She helped launch the “#1 for 30” campaign in 2016—celebrating CBS Daytime’s lineup as number one for 30 years straight. She also worked as a production assistant for the daytime talk show “The Talk” on CBS.

In her free time, Riley hosts her own podcast called “Life of Riley” where she enjoys interviewing guests about their lives and interests.