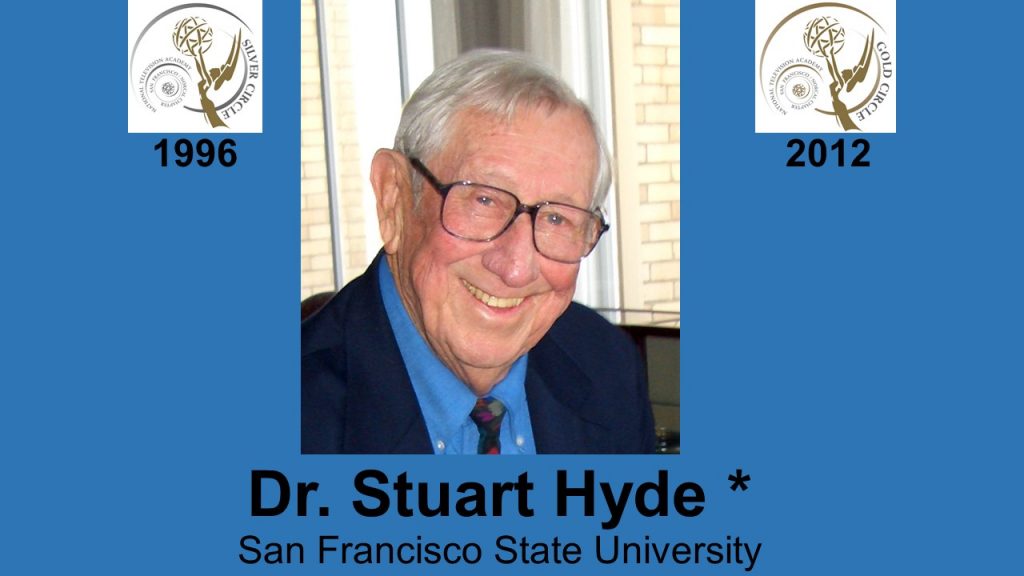 Stuart Hyde’s fascination with drama, theatre, film and radio began in Fresno during high school and college days. Following his U.S. Navy service in the Pacific during World War II, Hyde received an AB from UCLA and an M.A. and PhD from Stanford in Speech and Drama. He taught at Stanford and USC before becoming Chair in 1958 of the Department now known as Broadcast and Electronic Communications Arts (BECA) at San Francisco State University.  Hyde has taught and inspired thousands of students to pursue careers in broadcasting. His book, Television and Radio Announcing, was written in 1959.  Its twelve revisions and 150,000 copies have made it the industry’s standard authoritative text on the subject. He hired San Francisco State’s first African-American broadcast faculty member, Buzz Anderson, during the racially heated political climate of the 1960s. In 1969, Hyde answered the call of students protesting social injustices in America by teaching a class in media performance at San Quentin State Prison for eleven years. He formally retired from San Francisco State in 2007.  He was inducted into the Silver Circle (Class of 1996) and Bay Area Radio Hall of Fame (Class of 2011) and is a member of the Bay Area Broadcast Legends.