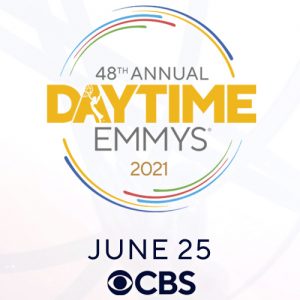 The National Academy of Television Arts & Sciences (NATAS) today announced the nominees for the television broadcast of the 48th Annual Daytime Emmy® Awards which will be presented on Friday, June 25 (8:00- 10:00PM, ET/PT) on the CBS Television Network and streamed on Paramount+.

The full list of nominees for the CBS broadcast is attached and available at https://theemmys.tv/daytime. More than forty categories will be given out on the broadcast and on social media. Categories to be presented are:

Final determination of categories presented on the broadcast vs social media will be announced closer to airdate. Totals by Network and by Program will be available with the June 28th press release.

The Daytime Children’s Programming and Animation Emmy® Awards will be presented in a stand-alone show streaming on our Emmy® OTT platform on Saturday, July 17, 2021 at 8p.m ET.

The Daytime Lifestyle Programming Emmy® Awards will be presented on our Emmy® OTT platform on Sunday, July 18, 2021 at 8 p.m. ET.

The live-stream of the July 17/18 Daytime Emmy® ceremonies will be available on the web at Watch.TheEmmys.TV and via The Emmy® apps for iOS, tvOS, Android, FireTV, and Roku (full list at apps.theemmys.tv). The program and many other Emmy® Award events can be watched anytime & anywhere on this platform powered by Vimeo.

This year’s awards honor content from more than 3,000 submissions that originally premiered in calendar-year 2020. The submissions were judged by a pool of more than 1,000 peer professionals from across the television industry whose confidential ballots were then tabulated by the independent accounting firm of Lutz & Carr, LLP.

The June 25th telecast will mark the 15th time CBS has broadcast the Daytime Emmys®, more than any other network. The telecast will be produced by the National Academy and Associated Television International (ATI), which previously produced Daytime Emmy® ceremonies on The CW in 2009 and on CBS in 2010, 2011, and 2020. David McKenzie will produce and direct for ATI and Adam Sharp and Steve Ulrich of NATAS will be Executive Producers of the show.