From more than 4,400 entries, 785 regional Edward R. Murrow Awards in 16 categories this year recognize more than 307 local radio, television and digital news organizations across the country and around the world. 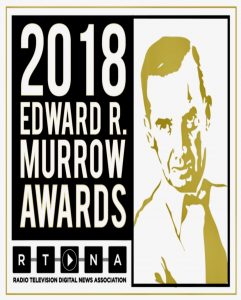 KPIX in San Francisco was recognized for Excellence in Video for its story, “Violence at Trump Rally”.

KNTV in San Jose received three honors, for Excellence in Social Media for its coverage of the “Wine Country Wildfires”, for Hard News (“Unmasking Antifa”) and for News Documentary (“Kicked Out”).

KTVU in Oakland was honored for Investigative Reporting for its “BART Janitor Cleans Up” story.

KGPE-TV in Fresno was honored in Excellence in Writing (“A Father’s Mission”) and in News Series (“The Wall”).

KMPH-TV in Fresno won for Sports Reporting for its “Blind Skier” entry.