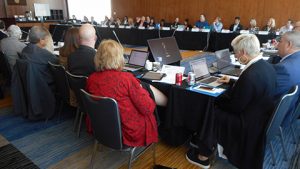 Each chapter elects at least one trustee (our Chapter is one of the 19 chapters represented). For every 300 local members, a chapter may elect one trustee. The San Francisco/Northern California Chapter is currently allowed four trustees (along with Suncoast and Lone Star Chapters, San Francisco/Northern California supports the most trustees). Trustees John Odell, Alison Gibson, Cynthia Zeiden and myself represent our Chapter. Zeiden could not attend and sent her proxy to Giannechini. 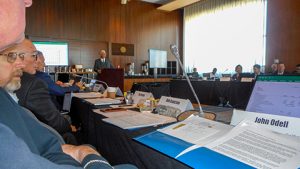 The meeting began with introductions around the table. Each trustee, officer and national academy executive briefly told where they were from and what their role with NATAS. Some chapters, like ours, have their local presidents also serving as a trustee officer.

The eight-hour agenda follows the standard Parliamentary procedure known as the “Roberts Rules of Order”. There were opening comments, introductions, approval of minutes from the previous meeting, and several committee reports and overviews. Some items need a vote by the attending trustees to change the direction or policy of the Academy. Trustees voted for a rule change in the Emmy® Award procedure. It is no longer a requirement to open envelopes to reveal Emmy® recipients during the local Galas. Trustees voted down a proposed rule which would allow proxies to count toward a national meeting quorum. More than half of the trustees must still be present to hold a meeting. Proxies are still allowed as before for votes during meetings.

Chuck Dages, NATAS’ national chairperson, described the changing landscape of broadcast. He cited the recent FCC decision regarding the decentralization of local broadcast studios. Local television and radio stations are no longer required to maintain local studios in the markets they serve. Dages fears that this may diminish or eliminate local programing in the 19 NATAS chapters. The lack of local productions would limit or eliminate local programming categories from our Gala Awards shows. Less local programs may mean less members joining the chapters and therefor a decline in membership and revenues.

Dages reiterated that NATAS reaches every household in the nation and challenges the trustees to quickly expand and adapt policies to adequately embrace the newer on-line broadcast forms.

The meeting continued with reports from all the committees; two are chaired by our local chapter members: Gibson on finance, and Linda Giannecchini on the national awards fronts.

After the meeting, trustees were treated to a river dinner cruise aboard the Freedom Elite.

The next trustees meeting will be in Spring 2018 in New York City.