Seven television professionals, whose career achievements and accomplishments and a dedication to the television community have propelled them to a mark of distinction in the industry, received an even higher honor Oct. 14 when they were inducted as the Class of 2017 for the Gold & Silver Circle of the San Francisco/Northern California Chapter of The National Academy of Television Arts & Sciences. 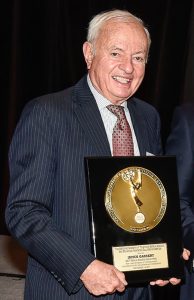 This year’s induction luncheon, an annual event since 1986, took place in San Francisco during a luncheon held at the Park Central Hotel. Approximately 125 people attended this year’s induction, an event that, through the years, is thought of more as a reunion for those in attendance, seeing friends and colleagues and making new friends as well.

James Gabbert, whose television career spanned more than a half century, was inducted into the Gold Circle. Gabbert is perhaps best known as the one-time owner of San Francisco’s KOFY-TV, an independent station which, after Gabbert purchased it and rebranded it, became well-known for its long-running Dance Party program (which he hosted for its entire run), a popular TV schedule of former network shows and a station identification break that featured dogs large and small sitting next to a big TV console with the “TV20” logo on it. Don Sanchez, Chapter regional vice president representing San Francisco and former longtime anchor and reporter at KGO-TV ABC7 in San Francisco, introduced Gabbert to the audience.

See more about the Scholarships Recipients, and opportunities for Students in our Chapter, on the Students page on our site.