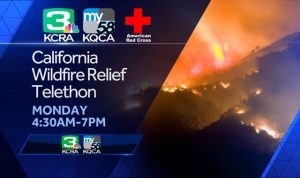 Sacramento – KCRA 3/KQCA My58 – During a 14-hour wildfire telethon October 16th, KCRA 3 raised a whopping $901,326. Partnering with the Red Cross, the funds will be used to help fire victims from the deadly cluster of blazes that ravaged neighborhoods and vineyards in northern California, destroying nearly six thousand structures. As homes burned to the ground, tens of thousands of people were evacuated and at least forty-people died. “After seeing the devastating pictures and hearing the tragic stories of loss, northern Californians showed their generosity,” said KCRA 3 and KQCA My58 President and General Manager Elliott Troshinsky. “Once again, the outpouring of support we received from our community was gratifying. We truly want to thank all of our viewers.” 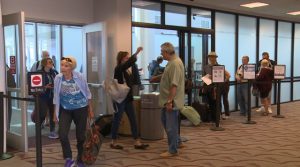 Santa Maria – KEYT Reporter Vicky Nguyen greeted the first direct flight from Las Vegas to Santa Maria Wednesday, October 4th, just days after the worst mass shootings in the nation’s history. She said that passengers were teary-eyed as they stepped off the plane and connected with loved ones at the Santa Maria Public Airport. It was supposed to have been a celebration – a new direct flight connecting the Vegas strip to Santa Maria. But it wasn’t. “Many of the passengers were on pins and needles after the mass shooting,” said Nguyen. “They couldn’t wait for Wednesday to come so they could go home. Everyone I talked to told me the flight felt strange.” And she said that the passengers were just glad to be home. 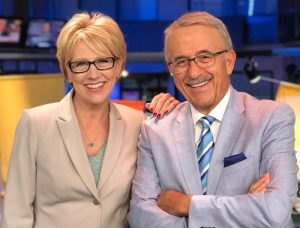 Fresno Fox 26 – Reporting news this past several weeks has been challenging. With so much sadness, here’s a bit of good news. Fresno’s Fox26 morning newscast is celebrating. “Great Day” launched 14 years ago on October 6, 2003. Anchor team Kim Stephens and Kopi Sotiropulos  kicked off the first broadcast and five Emmy® nominations later, the team is still together side-by-side.

Guam – KUAM – Acts of good neighbors often go unnoticed. KUAM is working to change that. KUAM News is providing The Good Neighbor Award. It’s a monthly feature highlighting acts of selflessness among everyday people. Be they bBig or small gestures, the station is recognizing individuals, profiling them on KUAM News Weekend Edition. In addition, the good neighbors receives a cash prize donated to a local charity of their choice.

San Francisco – KRON4’s Justine Waldman went flying high. It was perhaps the ride of a lifetime. Waldman climbed aboard a stunt plane with Team Oracle Pilot Sean Tucker. They zoomed two thousand feet above the Bay Area going 200 miles per hour. The stunt plane flew as part of Fleet Week that started October 1st. The US Navy Blue Angels put on an air show that drew about a million people. As for Waldman’s experience whipping through the air, she said that it was equal parts frightening and fun.