CBS network reported that 167 million viewers watched all or part of Super Bowl 50 on Sunday, February 7, played at Levi’s Stadium in Santa Clara. That makes it the most watched broadcast in TV history on an all-or-part basis.

Nielsen estimates that the game, in which the Denver Broncos beat the Carolina Panthers 24-10, had an average of 111.9 million TV viewers – ranking it the third most watched Super Bowl. They estimate an average of 115.5 million people were tuned in to watch the halftime show performed by Coldplay, Beyoncé and Bruno Mars. However, Nielsen’s totals don’t include out-of-home viewing, such as watching at bars and restaurants.. Internet streaming is not counted either – CBS made the game available on tablets, computers and streaming boxes like Apple TV. 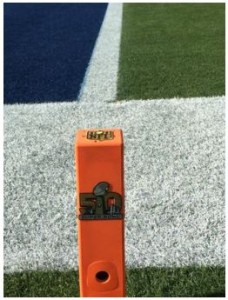 There were 70 cameras to capture the game, and Super Bowl 50 introduced a few creative camera twists and technological advances. One twist was “EyeVision 360” where CBS provided viewers a 360° perspective in high resolution. The system was comprised of 36 cameras strung around the upper deck of Levi’s Stadium. It could freeze a moment – for example when the ball crosses the plain of the goal line – then revolve around the scene, and continue to show the play.

For the first time ever in a Super Bowl, CBS incorporated “Pylon Cameras” – eight custom-molded orange pylons on the goal lines and   sidelines on each side of the field, housing 16 high-resolution, high-definition cameras. The pylons also had microphones embedded in them to enhance the sound of the game.

1 – Camera placed on the Needle at California’s Great America Amusement Park in Santa Clara that was focused on Levi’s Stadium.

4 – Sets used on Super Bowl Sunday – three at Levi’s Stadium in Santa Clara and one in San Francisco.

8 – Super Bowls Phil Simms has served as an analyst – the second most ever behind John Madden (11).

16 – Camera angles provided by the eight “Pylon Cameras,” for the first time in a Super Bowl.

19 – Super Bowls televised by CBS, the most by any network.