Exclusive to Off Camera

The coverage of recent natural disasters, such as Hurricanes Harvey and Irma and now a magnitude-8 earthquake in Mexico, is getting major air time on every television station in the nation. And, while stations continue to rely on their networks to provide them with feeds and live shots from the locations of these disasters, many in major markets like the Bay Area are sending their own news crews to cover the story.

At press time, KNTV NBC Bay Area dispatched weather anchor Vianey Arana and photographer Mykie Vang to Miami to cover the incoming Hurricane Irma, a Category 5 storm and what is now appearing to be one of the largest such storms in recorded history. In late August, KNTV, along with KGO-TV ABC7 and KTVU Fox 2, sent news teams to Texas to cover the devastation there in the aftermath of Hurricane Harvey. 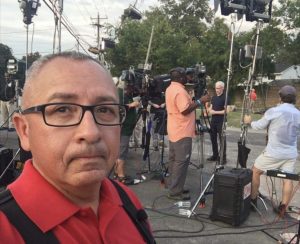 For KNTV’s Damian Trujillo, who was sent to Houston with photographer Tony Radulocech for several days, it was emotionally draining.

“There’s been so much heartbreak for so many,” Trujillo told Off Camera while in Texas. “The loss of life and property is unimaginable. One neighborhood suffers extensive flooding, and the next day it’s in a completely different area. Firefighters and police officers are exhausted, as I’m sure many other public servants are as well.”

At times, Trujillo got involved in helping people, but it wasn’t for his cameraman to record.

“Your heart breaks for their pain and anguish,” Trujillo says. “I personally helped a few elderly folks get out of their evacuation rafts and trucks. That was not something for the cameras to see, and they didn’t. That was the human being in me, in all of us. Which leads me to my next observation. There is hope. And that hope is in the form of that small child I saw delivering water to volunteers. The family with children who showed up with pizzas to feed police officers, victims and volunteers. Those volunteers who, without being asked, drove their boats, canoes, and jet skis to the vulnerable areas and got to work. I called it an armada of volunteers. Some worked four days straight, without seeing their own families, because they knew their fellow Americans need their help. In this time of suffering, one volunteer said it best. He said ‘there is more love in Texas than water’. Wow!” 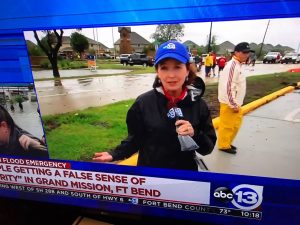 For KGO-TV’s Laura Anthony, who, along with photojournalist Randy Davis, was sent to Texas to cover the hurricane, the experience reminded her of exactly why she became a journalist.

“It’s why we do what we do.. the story is the thing,” Anthony says. “I’ve covered many disasters, from the Oakland Hills Fire in 1991 to tornadoes in Oklahoma, an earthquake in Seattle and now, historic and almost unimaginable flooding in Texas. I’m here and I can hardly believe what I’m seeing. But it’s real.”

She and Davis flew in to Texas almost like first responders – a team of local ABC-station reporters from San Francisco, Los Angeles, New York and Philadelphia – responding to an SOS from Houston station KTRK, to help in covering the crisis.

“Even as their own people were losing their homes and making sure loved ones were safe, they were staying on the air 24/7 telling the story — their story — in spectacular fashion and providing crucial, perhaps even life-saving information to the millions of people in Harvey’s path. Randy and I jumped in and became a part of that, did our small part to tell a huge story. And something happened along the way, almost everywhere we went, someone would stop to shake hands, even give us a hug, and thank us for what we do.” 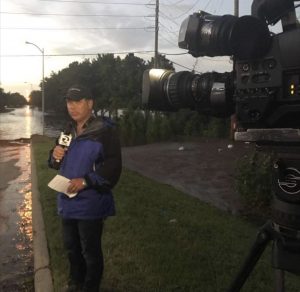 For KTVU’s Ken Wayne, the emotional impact of the hurricane’s devastating effects was practically too much to handle for the veteran reporter and anchor.

“Maybe I’m just getting old and weak, but I choked up a couple of times on air during live shots here in Houston,” Wayne told Off Camera after a long day of reporting the story with photographer Ryan Cecile. “I’ve never done that before. It hit me two days in a row in Katy, just west of Houston, as people were being led off rescue boats from their flooded neighborhoods.

It caught me by surprise, because I had watched these same kinds of scenes in New Orleans during Katrina, so there were no surprises here.”

Wayne was amazed with the people of Texas, many hospitable while facing their own crises.

“The people here have been wonderful and grateful despite their hardships,” Wayne adds. “I haven’t had a bad experience from anyone angry at the media or bitter at the emergency response. Again, lessons were learned from Katrina.”

Covering a story like Hurricane Harvey left an indelible impression on Wayne, as a journalist and as a caring human being.

“I guess my biggest lesson is maybe I’m not as jaded as I thought I was,” he says. “The power of TV still exists in the dramatic images and sound of people and animals struggling in real life situations. And sometimes, we, the messengers, lose an edge of professionalism and show a hint of humanity. I never want to cross that line of purposely hyping emotion. But when it hits you unexpectedly and you keep it together, it’s as real as it gets.”

Back to the Off Camera Index…