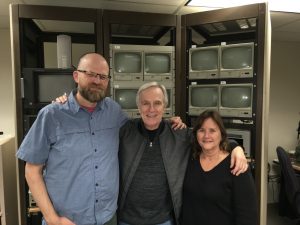 Two years of organizing and note taking was the right thing to do for Sacramento former Feature Reporter Steve LaRosa. It was a pure labor of love as he collected years of his past and donated it to the Center for Sacramento History.

“I donated probably hundreds of tape spanning my career at KCRA Channel 3, a short stint at Channel 31, and about 30 years of corporate video production and three documentaries I produced for KVIE Channel 6 Public Television,” said LaRosa. “I logged all of the material, my feature reporting – everything – part time over the course of a couple of years.”

As a designated feature reporter at KCRA back in the 1970s and 80s, LaRosa often reported about the unusual, sometimes eclectic, and always entertaining aspects of the Sacramento region. He also traveled around the country and world for Channel 3 as part of the Weeknight Magazine Show staff. His final glory at the station was working on a KCRA show called TV Light. It offered a satirical look at local and national news. It was right up LaRosa’s alley.

He glowed as a feature reporter, eventually producing and hosting a segment called Newsreel  for newscasts. Most of his work contained a little humor – something very difficult to pull off in television. But LaRosa was a master. In fact, he said there was an anarchist female producer who used to always use his stuff in the 11 O’Clock news. (Full disclosure – it was me.) She said it made for  memorable TV.

Now, every lick of his film and videotape lives at the Center for Sacramento History. LaRosa saved much of his work. What he didn’t have, his proud mother had collected, recording her son’s work on VHS. Going through all of it took time.

But LaRosa said that the donation is important for the future. “The museum has the Channel 3 film collection of news,” said Steve. “I was documenting the other side of life, what you’d find in a magazine, covering everything from music to art to pop culture and the restaurant scene.”

The museum is open to the public for research and licenses old film and videotape for use in programs and documentaries. It also has the KOVR-TV film collection. With both the KCRA and KOVR film collections, the footage provides an extensive look back at the administrations of Governors Edmund G. “Pat” Brown, Ronald Reagan, and Jerry Brown. Other historical events contained in that treasure trove include the Black Panthers storming the California State Capitol, Patty Hearst and the SLA kidnapping, and the Charles Manson interview done by Channel 3 Reporter Mike Boyd in 1972.

Now, add to all of that, feature stories that introduced viewers to rock stars making their way through Sacramento, new restaurants in town, and stories that just tickle your soul and make you smile. “When I think about a researcher or documentarian 50 years from now, I think as it was if it were for me in my documentary research,” said LaRosa. “Wouldn’t it be great for them to have a documentation of the other side of life in northern California, from a cultural and sociological perspective, not just what they might find in news coverage.”

At his semi-retirement party, LaRosa put together a collection of his work and had people rolling in the aisles. For your entertainment and a brief escape from reality – take a look at the attached link.

LaRosa currently runs Steve LaRosa Productions, serving as an advertising and public relations agency. He’s also an active volunteer – in oh so many ways – in the Sacramento Community. Shoring up the Center for Sacramento History is a premiere example.