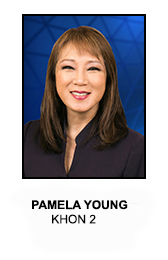 Pamela Young is currently a producer/reporter at KHON 2 after spending 26 years at KITV 4 (ABC Honolulu), she also worked for  KPIX and KQED in San Francisco. She is an 12 time Emmy® winner and is a Peabody recipient. She is the producer and host of “Mixed Plate”, which is Hawaii’s longest running news feature series. She currently holds the position of NATAS VP-Hawaii and would like to continue to use her experience as a Governor.  She is also a member of the Silver Circle