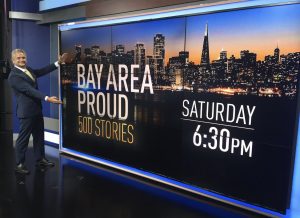 Of course we are interested, and very much so.

As journalists, we believe it is our responsibility to inform our audience about what would be considered bad news, such as crime, disorder and corruption.

KNTV NBC Bay Area certainly does. And, in particular, reporter Garvin Thomas does, too. 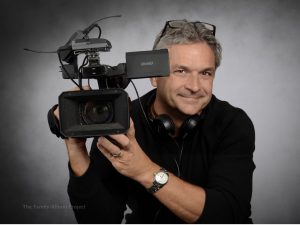 From the very beginning, KNTV NBC Bay Area reporter Garvin Thomas has been a one-man band with his Bay Area Proud series of stories. He shoots, reports and edits. He does it all, and he makes it seem effortless. Undoubtedly, Thomas loves his work.

Nearly seven years ago, the San Jose-based NBC-owned station for the San Francisco Bay Area decided it was time to do all it could to find the good news stories that certainly do exist here in our region. Inspiring stories of people making a difference in our communities, from San Francisco and San Jose, to Oakland and the East Bay to the Peninsula and up to the North Bay. There are plenty of good news stories to be discovered.

Thomas has been at the helm of the entire Bay Area Proud franchise since that very first story in 2012. He has been a reporter and anchor at the station since 2004. 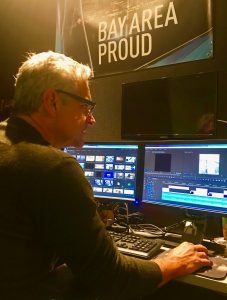 In his edit suite at the station, Garvin Thomas is a one-man band. He is not only the reporter, photographer and producer of all of his Bay Area Proud stories, he also edits them. He loves the ability to be creative with his work.

Thomas remembers the very first Bay Area Proud story was about a homeless shelter for disadvantaged pregnant women, where women could go to get sober (if they had a drinking problem), and a place “where they could go and have their babies, and get back on track in order to get back into the world.”

Thomas said the first six months of Bay Area Proud was a “feeling out period”.

“It took me awhile to get my legs under me,” he said. “We were trying to figure out what the series was going to be like, so it took a little time to know what was going to make good TV, as well as what I wanted to do. Finally, after about six months, it clicked. Doing a story about a woman in Danville who made superhero capes for sick kides. That story for me has always clicked. This is what I wanted Bay Area Proud to be.”

Thomas said the stories he reports on for Bay Area Proud are not necessarily stories about non-profit organizations or other groups, but instead, the stories are about individuals.

“I could sum it up in one sentence,” he said. “Every story is about someone who did something nice for somebody else. It always fits that mold. Like, there’s a guy who.. or a there’s a wo,man who… bing! That’s what I want. They are people stories, about people who do good things for others. And, I keep the definition of what’s good news as broad as I can, so I can keep the variety. And that way, we catch all this stuff.”

Every single story of the last 500 airings has been, in one way or another, touching.

“I cry all the time when I’m interviewing these people,” Thomas admitted. “I guarantee you, when that person is being interviewed and they’re crying, I’m crying behind the camera, too.”

Thomas explained that he has a skill with connecting with people who he features in his stories.

“Their stories definitely touch me,” he said. “I am totally open with connecting with the people I do stories about. I am trying to understand what they’re feeling. When you get on that, you get emotional yourself. ”

The Bay Area Proud series has received numerous honors during the last seven years, from a half-dozen or so Emmys to honors from the Society of Professional Journalists, Sigma Delta Chi, Gabriel Awards and the Radio Television Digital News Association.

Thomas’ television career has been long and successful. Before arriving in the Bay Area in 2004 to work at KNTV, he worked at KABC-TV in Los Angeles, WHDH in Boston and WCCO in Minneapolis-St. Paul. In 2019, he marks his 30th year in television news.

But, working on Bay Area Proud every day for nearly seven years has helped Thomas to put his work, and his career, in perspective. Thomas continues to discover the good news stories viewers crave.

“This assignment (Bay Area Proud) has given my career a meaning and a purpose, that it had not previously had,” he explained.”I am so very grateful.”