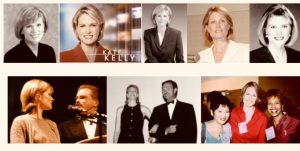 (EDITOR’S NOTE: This encore edition of Gold & Silver Circle Profiles originally appeared in the May 2013 issue of Off Camera)

One pleasant San Francisco afternoon, people watchers sitting around drinking coffee along the city’s fashionable Maiden Lane in Union Square take admiring glances at Kate Kelly as she strolls down the famed alley. Wearing a head-turning pink blazer and black slacks, she’s on her way to an interview – to be interviewed, actually. 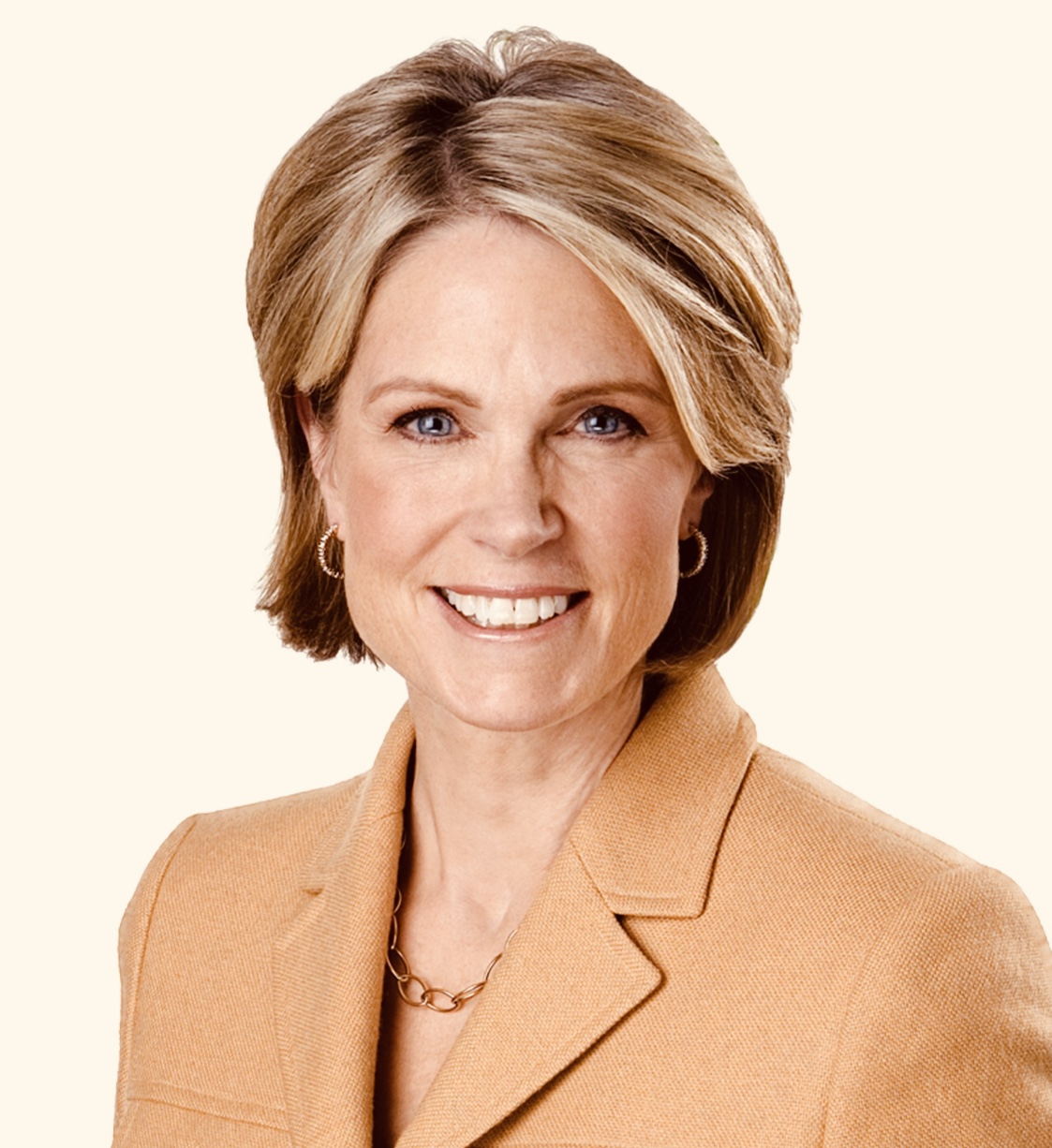 Kelly is right at home in San Francisco. That’s not surprising. Not only is she a Bay Area native, she’s been a very familiar face on TV screens here for a long time. How long? To some, it seems like yesterday that Kelly arrived at KPIX’s Battery Street studios for her first day on the job. That day was Jan. 1, 1984. Now she is achieving something few people in the business can say they’ve accomplished: lasting, at the same television station for over 35 years.

The Emmy® Award-winning Kelly has practically done it all in her years at the Bay Area’s CBS station. In addition to being a reporter, she’s also anchored nearly every newscast at KPIX. Several months after she arrived there, she began co-anchoring the weekend evening newscasts with Doug Murphy. Kelly has also anchored the station’s 4:30 and 5 p.m. newscasts as well as its 11 p.m. broadcast, with the legendary Dave McElhatton. Kelly has also covered nearly every major Bay Area story, from Pope John Paul II‘s visit to San Francisco and the Loma Prieta earthquake to stories of every scope. Inducted into the Silver Circle of the San Francisco/Northern California Chapter of the National Academy of Television Arts and Sciences in 2005, Kelly grew up in Belvedere, in Marin County. Her mother passed away when she was a young girl. Her father sent her to San Domenico School, a Catholic girls’ school. Kelly graduated from Stanford University in 1979, and her career immediately took off. After graduation, she was hired as an anchor, reporter and photographer at KRCR-TV, a station in Redding that, at that time, had dual affiliations with ABC and NBC.

“I did everything there,” Kelly recalls. “I shot, wrote and edited my own stories. I swept the floor. Everything.” Kelly remained in Redding for one year before moving on to a larger market – Austin, Texas – and a new station, KVUE. There, as an anchor and reporter, she 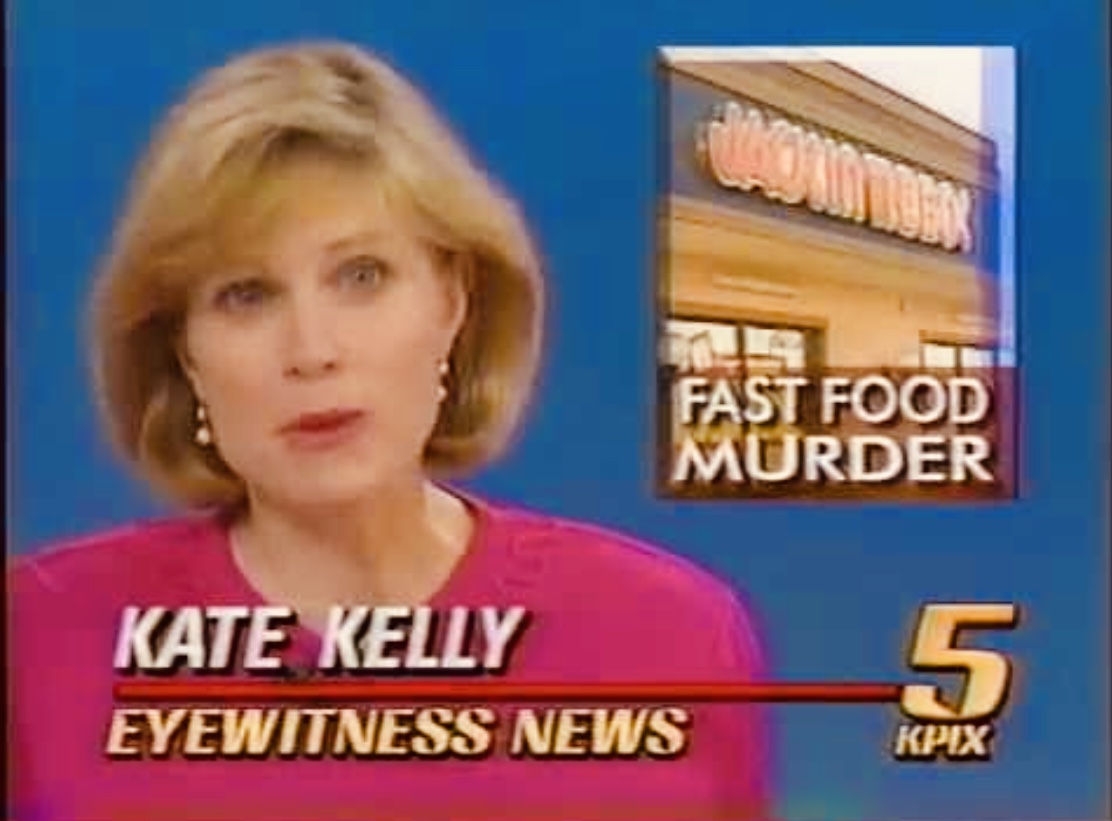 remained three years, and, during that time,the station won the United Press International and Associated Press honors for Best Newscast in Texas, three years in a row. In late 1983, the Bay Area appeared on Kelly’s career horizon, and it was time for her to return home to her native San Francisco. KPIX came calling. Kelly answered the call, and by November of that year, she was back home. She began at KPIX on Jan. 1, 1984, as a general assignment reporter.

“Joe Fonzi and I started on the same day,” Kelly says of her first day on the job with her then-sportscaster colleague (Fonzi is now across the Bay at KTVU in Oakland). In a matter of months, Kelly was promoted to the anchor desk, sharing weekend anchor duties with Murphy. Kelly’s career was not only taking off, but she had become a critically-acclaimed television journalist before she was 30 years old. In 1984 – the year she started at KPIX – Kelly was named Outstanding Young Journalist by the Society of Professional Journalists. More accolades would shower upon her in the years ahead. While Kelly’s career at KPIX prospered as a reporter, she was also prospering as an anchor in what was then the nation’s fifth-largest television market. Management took notice, and in 1987, Kelly began anchoring the station’s 11 p.m. newscast on weeknights, sharing the desk with McElhatton.

Two years later, on Oct. 17, 1989, the Bay Area was hit by the Loma Prieta earthquake. At the time the quake hit, Kelly was in the area near San Francisco’s famed Lefty O’Doul Bridge, near present-day AT&T Park. “I saw an 18-wheeler rocking back and forth on the bridge,” Kelly recalls. Kelly and her photographer were dispatched back to the station’s Battery Street studios. But, along the way, the quake’s wrath was clear. “People were coming out of the Ferry Building,” she says. “There was dust in the air, and hunks of concrete were falling all over. All we could do was race back to the station. We did the news from the newsroom desk. It wasn’t pretty, but we got the information out. You realize how small your community is when you have a natural disaster. Such a different world.” 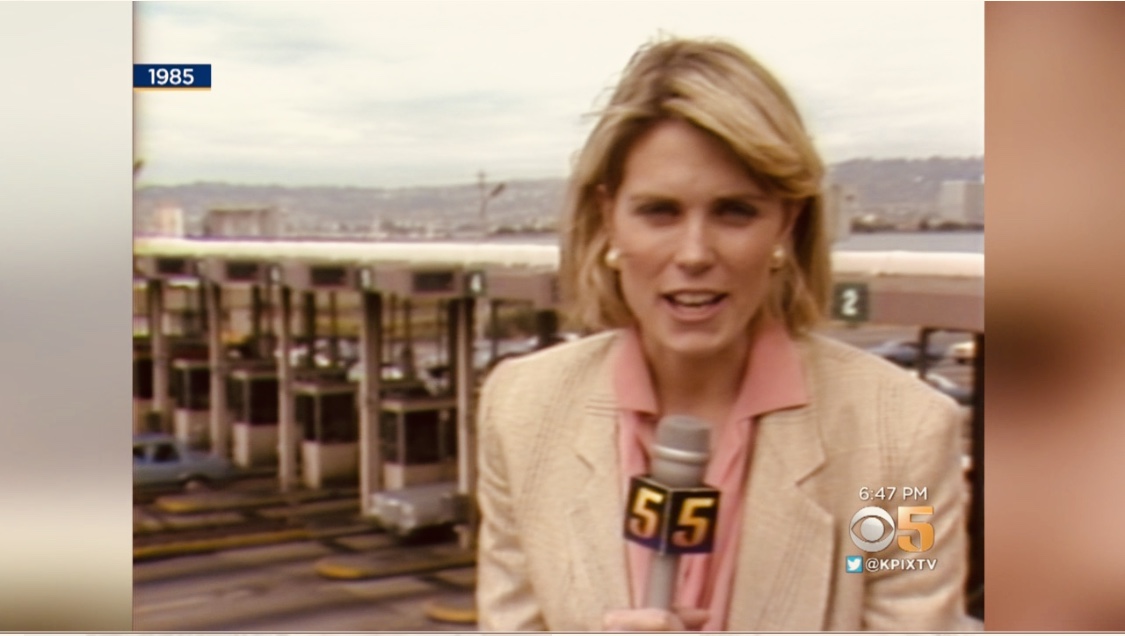 “We were on the air through the night and into the next morning,” Kelly explains. “I remember leaving the station the next morning at 5 a.m. I had been on the air from 1 to 6 a.m., sharing the latest developments with our viewers. Then, Dave and Wendy (Tokuda) took over the next day.”

Following hers and the station’s earthquake coverage in the days and weeks to come, Kelly’s anchoring duties expanded to include the 5 p.m. newscast weekdays, with McElhatton, in addition to her 11 p.m. responsibilities. Kelly remained on the weeknight anchor desk until 1999, when she shifted gears to strengthen KPIX’s morning newscast with then-co-anchor Ken Bastida. The following year, she returned to the anchor desk on the 4:30 and 5 p.m. newscasts weekdays.

Through her nearly three decades at KPIX, Kelly has covered practically every kind of news story. Among the most notable examples of her unique storytelling, Kelly reported on the devastating Oakland Hills firestorm in 1991 and the visit by Pope John Paul II to San Francisco and the Bay Area. “It was the Pope’s first tour to the U.S.,” Kelly says. “”We went to Rome, got on his plane, and came back to the Bay Area with him. The Pope would then come out of first class, and talk with all of us journalists on the plane.” Kelly has also covered numerous stories about AIDS, including Ward 5B at San Francisco General Hospital – the AIDS ward.

On the flip side of her reporting, Kelly has flown with the Blue Angels during a Fleet Week appearance over San Francisco Bay. In January 2005 – at the beginning of her 22nd year at KPIX – Kelly launched the first of the Bay Area Jefferson Awards, a weekly tribute to volunteers performing outstanding public service in the community. Working together with the National Institute for Public Service in Washington,D.C., along with a local committee of non-profit representatives, KPIX accepts nominations, then selects Bay Area award recipients. Kelly’s contributions to the station’s Jefferson Awards coverage led the station to be recognized with an Emmy® Award for community service. Kelly and the station have also received the Good News Award for their series by the Northern California American Women in Radio and Television organization.

“I’m so proud to be a part of these Jefferson Awards,” she says. “We do 52 stories a year. We shoot each story in a day. Because they’re long-form stories, it’s not a same-day turnaround.” Kelly enjoys telling the stories of those she spotlights for the Jefferson Awards.

“We profile people in the Bay Area who do outstandingly as volunteers in public service,” she explains.

During her years at KPIX, Kelly has had many stories affect her personally, such as the California Burn Relay, begun by the Alisa Ann Ruch Burn Foundation. Ruch was an 8-year-old Southern California girl who died from burns she received in a backyard barbecue accident in 1970.

“For me, for 20 years, covering the relay was one of the most touching stories I could do,” Kelly says. “I was really honored to be a part of that. The firefighters, they’re all heroes, and they’re doing it for the kids. And then, you meet these kids who overcome incredible hardships. In addition to her Emmy® honors and other accolades, Kelly has also been honored by the Radio Television News Directors Association and the California Teachers Association. The Marin County native is “very proud” to have spent over 35 years on Bay Area television.

“I’ve been so fortunate to have a career where I can live and do this job in the town I grew up in, get married, and raise kids here,” Kelly says. “I’m very grateful.”

To work in San Francisco and the Bay Area is something very special to her. “This city was founded overnight with the Gold Rush,” she says. “And, because of that, we have all had to learn to get along from the get go. You feel very proud to work here, and live here, and that’s how I feel, that I am a part of this fabric that is the Bay Area.”

Kevin Wing has been authoring Gold & Silver Circle Profiles for Off Camera since the summer of 2007. Currently with KNTV NBC Bay Area, Wing is a 2013 Silver Circle inductee.