Old “getaway” tapes or treasured stories sitting on a shelf in your office or stashed under a desk, now is the time to get them transferred. If you’ve been in the business a while, an old three-quarter inch tape might have some funny blooper moments – or a live shot you’ll want to remember. Perhaps you’ve saved a story that was important to you’ll want to pull some file footage from it for a new report.

The problem these days is that playback machines are quickly disappearing. Dub houses may have more access in the San Francisco Bay Area. But a search throughout Sacramento recently for a three-quarter inch recorder turned up one functioning deck. There may be more out there but they are very difficult to find. 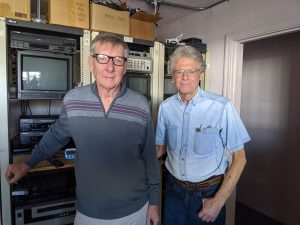 then a massage parlor, Video Labs is saving the day for some veteran TV people wanting to preserve their old footage. Owner/Photographer Marty Nelson is encouraging media people to transfer footage soon. “It’s very important people move their media over to sustainable drives,” said Nelson. “When these decks break down, we no longer have repair people to fix them.”

Nelson believes he may be one of the only shops in the Sacramento area that still has a one-inch machine. When it goes, people who own programs or footage on that format will be out of luck. “Not only are there fewer people to do the repairs, parts are no longer available either,” said Nelson.

Brent Hamilton is a veteran television technician and artist who has worked at a couple of TV stations in Sacramento. Now, he repairs tapes, transfers them along with film working for Video Labs.

He said that he’s heard some tragic stories, especially from recent fire ravaged regions. “A year ago, a family from Santa Rosa was out of town on vacation in Hawaii and when they came home, their house had burned to the ground,” said Hamilton. “They lost everything; photos, film and family videos. On a hard drive in a safe, those memories would have been preserved.”

Video Labs is located on Arden Way in Sacramento.