Robert “Bob” Hirschfeld, a longtime Bay Area television journalist best known for his work as a reporter, assignment editor, writer, producer and operations manager during his 23 years at KTVU in Oakland, has died at the age of 71.

Hirschfeld died Jan. 3 while on an ocean cruise with his family.

“Bob was a guy who was well-liked by everyone who knew him,” said Fred Zehnder (SC 1991), who served as KTVU’s news director from 1978 to 1999. “He had a great sense of humor and was a very positive force at KTVU. I have just so many pleasant memories of Bob during the years I worked with him.” 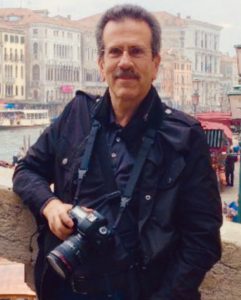 Hirschfeld was a San Francisco native who spent most of his life in Alameda. He was a passionate photographer, avid traveler, and self-described computer geek. Born to Holocaust survivors, he attended Lowell High School in San Francisco and received his Bachelor’s degree in Broadcast Journalism from San Francisco State University in 1969, where he was the photo editor of the Daily Gater student newspaper.

He began his career in journalism at Time magazine, then moved to radio, working at KCBS, KIOI and KGO in San Francisco. Eventually, he moved to television, joining KTVU. Besides the many roles he held in the newsroom there, Hirschfeld has always been regarded as the station’s very first webmaster,  spearheading the creation of ktvu.com and serving as webmaster during the early days of the Internet. After leaving KTVU, he spent two years at TechTV as a reporter and field producer.

“Bob was very personable and always willing to spend a few minutes to talk between his news chores,” said Steve Shlisky (SC 2014), a longtime KTVU producer and editor and the current president of the San Francisco/Northern California Chapter of The National Academy of Television Arts & Sciences. “He was interested in anything you had to say and shared much of his own life with me.”

Hirschfeld concluded his career with 10 years as a public information officer at Lawrence Livermore National Laboratory, where the cutting edge science and technology fed his insatiable inquisitiveness. Upon retiring in 2013, he and his wife, Joyce, traveled extensively, enthusiastically documenting all seven continents with vibrant photographs and detailed blogging.

The Hirschfelds were married 47 years. Besides his wife, he is also survived by daughters Jenny and Becky (Adam).

Memorial services have not been announced. In lieu of flowers, the family asks that a donation be made to the Prostate Cancer Foundation at cure.pcf.org.