Award, I’ll admit that I had to look back and see which one was my first.

2002-2003 Investigative Reporting, Airport Security it read. I remember the assignment more than I remember that night. We were tasked with putting airport security to the test in a post 9/11 world. Could it happen again? You know the drill.

Truth be told, each Emmy Award has a unique memory attached to it. But I’ll never forget what my esteemed colleague, and the person I won the Emmy® with, Hank Plante told me:

“The first line of your obit has been written”, he said, “The Emmy® Award winning photographer Rick Villaroman…”

It’s a comforting thought and one that I’d never really given much thought to but as I look back now I realize he’s right.

Although I don’t remember much about that actual night (my friend Jack might of had something to do with that), receiving that award was the first highlight of my career and the beginning of a sense of pride that continues to fulfill me to this day.

The assignment gave me an opportunity to highlight a particular set of my skills. Mainly as an undercover operative. I can still feel the rush of adrenaline as I pretended to be someone that I was not. Keeping my wits about me as I pushed the envelope, and airport security. Recording every moment unknown, opening unsecured doors as alarms sounded and waiting for security to rush me and place me under arrest. But, to my amazement, they never showed. I was never stopped, questioned or scrutinized in any way.

And I’ll never forget the moment my supervisor told me unknowingly into the recording eye glass camera, “if you see security, hide in the belly of the plane because you don’t  have your badge yet” nor did they ever complete my security back ground check for that matter. It was shocking.

Obviously, it paid off (in more ways than one, I got a check in the mail for the time I worked at the airport).

It really rocked the transportation industry and I’ll never forget Hank’s professionalism during his interview with Norman Mineta, the then U.S. Secretary of Transportation. “Really, is that how you want to play this?” He said incredulously to Mister Mineta. Hank really has a way of respectfully calling you to task and then shaking your hand afterwards. A skill I saw many times over the course of our 9 years together.

It was a lot of work and quite stressful so receiving the Emmy® was a nice acknowledgement of the hard work we put in to it.

It was also the first time I would take the stage with my good friend Hank Plante (out of the eight times I was graced with the honor, Hank shared four of those moments with me).

I’ll never forget the next time we flew on assignment together out of Oakland Airport and the security screener walked right up to Hank, called him by name and said, “Mr. Plante, will you please come with me.”

Yup, for better or worse, everyone knows Hank. At least at Oakland Airport they did. Thankfully, they didn’t remember me. Benefits of being behind the camera.

I didn’t know it the first time we took the stage together, but as I think about it now, I realize how truly special that moment was.

As a San Francisco Native, I’d grown up watching these people and now, here I was, standing side by side with one of the greats accepting this award. Yes, for me it was my first Emmy®, but more importantly, it was the beginning of a friendship that I’ll cherish forever. I shared that moment with no one else, and with nothing less than one of the best Bay Area reporters the industry has ever seen.

It was truly a dream come true.

Most people spend their entire professional lives and never have the kind of working relationship that I shared with Hank. The kind of relationship that defines you both and gives you the revelation of the things you can and have accomplished together.

I’m truly blessed. But it didn’t happen just once, it happened twice, and I can’t finish this article without mentioning him too.

The actual physical statue makes a great book end. So if Hank was my first then it was my last Emmy® with another great reporter, Phil Matier that has equal meaning for me.

After 28 years of working together, through 3 different work places, that Emmy® Award (2017-2018 Breaking News: Berkeley Riots) makes a wonderful bookend at the other end of the shelf and my career.

So, to my first girl, Emmy®! I found you some 17 years ago and you lasted longer than all the rest!

And to my last girl? If you are indeed my last, then all I can say is I’m content knowing that I’ve forged some of the greatest connections and friendships that only working in the field can create. I’ve accomplished more than any one man in this career has the right to.

So finally, with great respect and admiration, to my good friends Hank and Phil, 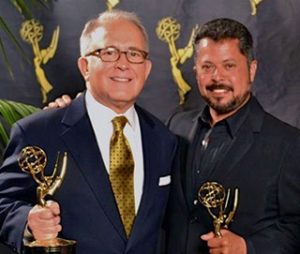