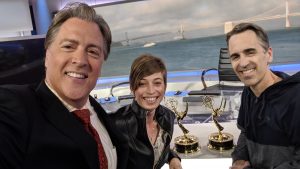 KGO’s 6 PM Newscast Producer Kate Eby is still beaming. She received her first Emmy after ten years in the business at the June 2019 Gala at the SF Jazz Festival. She’s a woman making it in a business that at one time – not all that long ago – was dominated by men.

Eby celebrates the pioneering women who opened up the field for her. But Eby also is a demonstration of what it takes to succeed in the business. She’s got heart and soul. 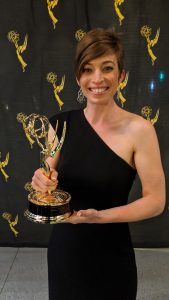 The show that received the Emmy for Best Evening Newscast revolved around the day the Camp Fire burned Paradise to the ground. The news was devastating and the program was a flow of constant change. Eby juggled in the control room and the newscast was technically flawless.

Still, when Eby’s name was called that she was getting the Emmy, she gasped. Eby knew she had a strong program. “It was a big day of breaking news and throughout the show, everything came together,” said Eby.

One week to the day after getting that Emmy, Eby went the extra distance. “I had to go and see Paradise for myself,” said Eby. “Here I have an Emmy for something that was so devastating.” Things look very different from inside the control room. And so Eby drove to Paradise to bring it full circle. She had to see the devastation for herself.

While attending UC Davis, Eby worked part-time at Sacramento’s Fox 40. “I’d come in, volunteer and then they would pay me for a few hours, eventually making me a freelancer. After graduating, Eby went into marketing.

But she couldn’t let go of TV. For a couple of years, Eby worked two jobs, one at the marketing firm and the other at Fox 40. She found her passion was television and eased into a full time position.

“The Emmy is a validation of the work I have put in,” said Eby. 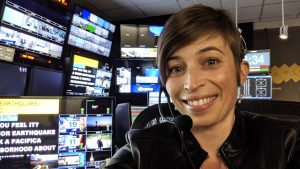 From Sacramento, she was hired as an executive producer at CBS4 in Indianapolis. Then in 2015, KGO’s 6PM producer was retiring and Eby got the job.

As a woman producing news, Eby said that she realizes it wasn’t that long ago when things were very different. “You look back, it was a lot of white guys smoking cigarettes who put on the news,” said Eby. But, oh, how things have changed. KGO is strong in gender diversity.

“I have a duty to those women who came before me and to those pioneers to not take these jobs for granted and to honor their legacy and the work they’ve done with my own work.”