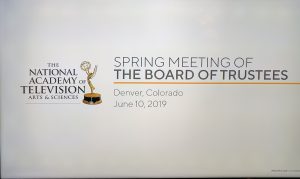 The National trustees traveled a mile high to Denver for their biannual assembly. These meetings, dictated by the national by-laws, allow the 19 local chapters to kick around important issues facing the national governance. It puts a face to our Chapter as we exchange ideas, issues, and the trajectories of our institution with other sections across the country.

Following the Roberts Rules of Order the Call-to-Order was moved, seconded and approved as was the agenda. Next National Chairman Terry O’Reilly detailed how far the organization has progressed in his inaugural year. O’Reilly explained how National has stabilized its past financial issues, averted a boycott of shows from the Daytime Emmy© Awards, advanced a closer relationship with The Academy of Television Arts & Science (ATAS – our sister organization), and embraced a policy of greater transparency among membership and the New York main office. O’Reilly summed up his report by stating: “We are headed in the right direction”. 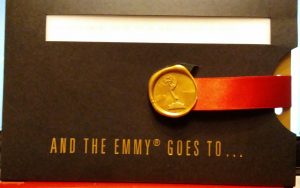 Immediately following O’Reilly’s report, National President Adam Sharp focused on the past year. Our membership increased by 3.5% – the largest year over year growth in our history (now 17,771 members), greater ticket sales and greater financial stability.  This is Sharp’s third trustee meeting (he was interim president for his first meeting). National’s move to a new headquarters is nearly complete, this year’s three of four major award shows are in the can (The Tech Awards at NAB in April, The Daytime Emmy® Awards, and the Sports Awards), the News and Documentary Awards will be in late September. Sharp then unveiled an exciting new design to the Emmy® Award announcement envelope. Instead of a plain card in an awkward-to-open onstage envelope, the new cards – smartly dressed in a packet with a pull tab release of the announcement – provide an elegant solution and: “Are suitable for framing by recipients” according to Sharp. [And the Emmy Goes To…]

The president explained the need to diversify the awards to new production models, citing the need to recognize the change in viewing habits and audiences. He wants to: ”Target Netflix, Amazon and You Tube as active organizations” and figure out how they fit with the Networks and Cable awards. Sharp also expressed the importance of encouraging clip views in our social media.

Sharp concluded his presentation with a gauntlet of objectives: rethink award relevance among new viewing habits, create greater community engagement, and increasing membership (building on last year’s increase of by 3.5%). 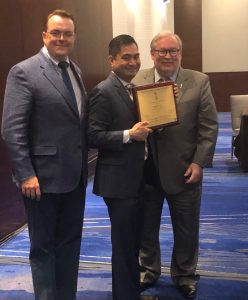 Sharp and O’Reilly concluded their report with a tribute and farewell plaque to Director of Academy Operations Bob Lazo. We are losing Lazo from National may still see him closer to our Chapter

Lazo will spend the summer in the Bay Area where he will be working with the Woodminster Summer Musical program in Oakland: “I’m focusing my career efforts specifically on theater, taking the opportunity to work as a stage manager in three musical productions this summer in Oakland at Woodminster Amphitheater:  Newsies, Billy Elliot, and Into the Woods.” 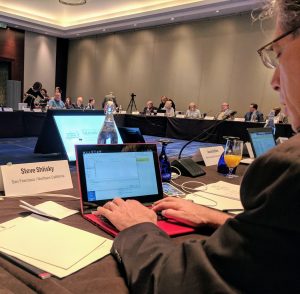 The afternoon session was filled with various committee reports from marketing with a tease to a new branding design (more on that later this year), treasurer’s report, financing, By-Laws changes, Awards, and a rollout of our streamlined expense reporting and emmyonline emails for officers and trustees.

Later that evening the 44 trustees were treated to dinner at The Fort, a well-known restaurant outside of Denver near the Red Rocks Park and Amphitheatre.