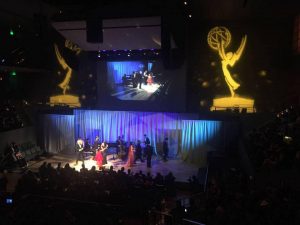 The 48th Northern California Area Emmy® Awards Gala will be the big event in San Francisco on Saturday evening, June 8.

This year’s nominations will be announced at 8 a.m. on Wednesday, May 8, on this Chapter’s website, www.emmysf.tv. That’s exactly one month from the Emmy® Awards Gala.

Wayne Freedman, of KGO-TV ABC7 and our Chapter’s awards chairperson, will begin the program with opening remarks. Handling the interviewing of the Emmy® recipients as they walk on to the Red Carpet will be Da Lin of KPIX 5, Kim Stephens of KMPH Fox 26 and Kevin Wing of KNTV NBC Bay Area.

First, your Emmy® Gala Committee congratulates you on being a 2019 Emmy® nominee! We need your help in streamlining an inevitably long show.

We will announce category recipients simultaneously. When you hear your name, please enter the stage from audience left. There, Mr. or Ms. Emmy® will present you with a statuette and direct you to your podium. When you conclude, we will drop your lights and illuminate recipients at the second podium. After they finish, Mr. and Ms. Emmy® will escort you from the stage.

Each nominee has submitted the name of a designated spokesperson. When the host announces a recipient, he or she will introduce him or her. If your spokesperson is a no-show, another qualified party may accept the statuette in their place. Other named, receiving parties may join your spokesperson on the stage, but please, no additional speeches.

If you did not submit a spokesperson, then the host will simply announce the award recipient and move on to the next category.

We will limit all speeches to 30 seconds. After that, the music will start and your podium lights will start to dim. Don’t get caught doing pantomime in the dark.

If you have already given a speech or are not the designated spokesperson, we will not turn on the microphone.

Please note that the statuette you receive on stage has no names on it, and will not be the one you take home. Please return it after we escort you from the podium.

From backstage after your speech, we will take you to the Red Carpet where you will receive your engraved statuette. Talk as long as you like while we interview you for the LIVE webcast and take your formal picture.