Passion impacts progress, survives setbacks, celebrates victories and overcomes disappointments. Having been an HIV/AIDS activist since the 1980s, I know the roller-coaster ride only too well.

As a TV news producer, starting in 1986, I used to turn an AIDS story a week during the early days of the unfolding pandemic. Soon I was recruited by an AIDS nonprofit to join its board. And I did.

Then – a life interrupted. Using protection, I got pregnant. I wasn’t married. The daddy didn’t want a kid.

And with great support from my new found HIV/AIDS community – I had a baby. At the age of 40. 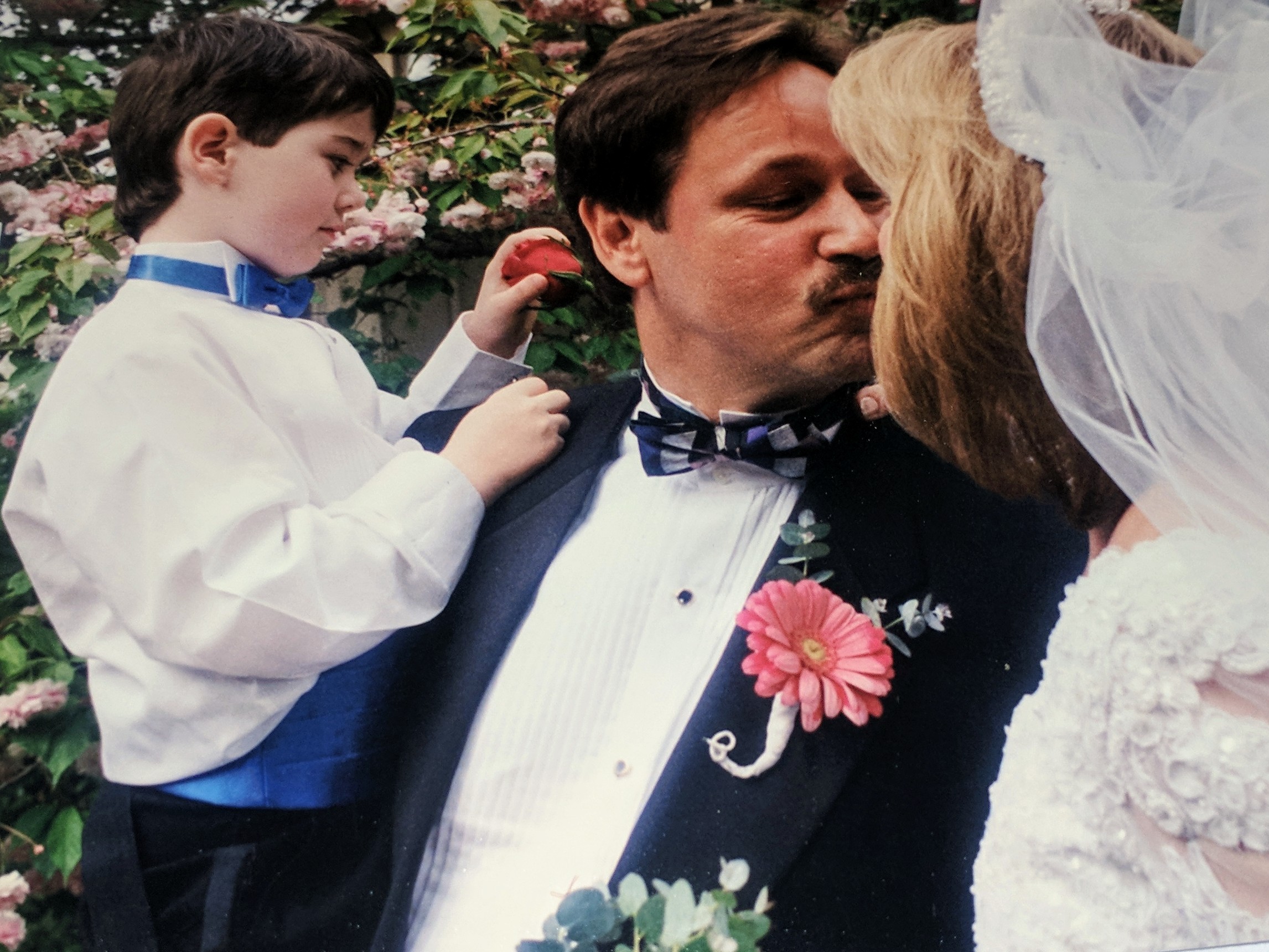 Joyce Mitchell with her husband, Dr. Eric Reininga, on their wedding day and with son, Jameson

I took six weeks off after my little boy was born then went back to work. Stretched thin, I never for a second abandoned my commitment to AIDS. Jameson attended his first AIDS walk in a stroller.

My mom was 76 and no question she was old-fashioned. But she supported my choices.
Still, she would ask, “Why do you spend so much time at that damn Sacramento AIDS Foundation? You’ll never meet a man there.”

She had a point. Most of my friends there were gay men. They loved me as a straight media-connected ally and new single mom. And I loved them back. When my aunt said I embarrassed the family by getting pregnant, the guys reminded me “shame” was not in our vocabulary.

I frequently got exclusive stories because of my involvement in the community. I had trusted sources and they knew I would help carry the message.

One assignment was about needle exchange. It was illegal in those days to even meet about it. A well-known AIDS doctor invited my photographer and me to cover an underground meeting.

With a lawyer on stand-by in case we were arrested – and yes it was possible – the doctor – my trusted source – called-in sick! A bitchy woman tried kicking me out of the meeting but I sat down on the floor, crossed my legs and refused to leave.

The city council was debating the issue and I knew airwaves would raise awareness that needle exchange could help slow the spread of HIV/AIDS among injection drug users.

While sitting there, I noticed a handsome man across the room smiling at me. I assumed he was approving of my determination. I did get the story and it led the 5 p.m. newscast.

That handsome man was a psychologist and harm reduction advocate. Shortly after, I was set-up to interview him for another story. And, the rest is history.

Turns out my mom was wrong. I did meet a man while working for that “damn” AIDS Foundation. She always embraced my son, then came to love the new man, and my cause.

A couple of years later, that new man and I ended-up getting married. Or rather, my son 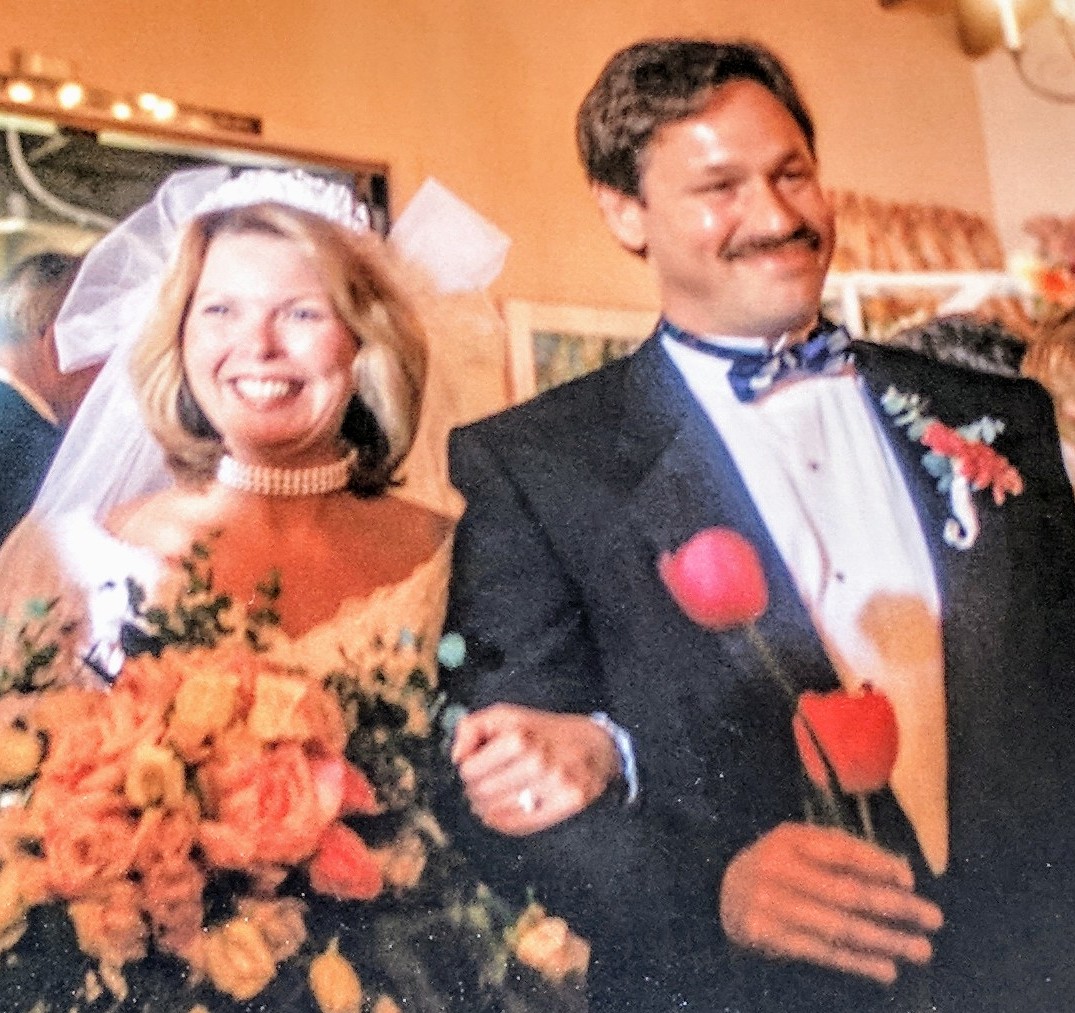 and I married that new man. At our wedding, the Gay Men’s Chorus sang as I walked down the aisle.

One of the songs I asked them to sing was “Stand By Your Man”. It brought down the house. My mom was tickled by how my life was turning out.

Twenty-five-years later, Jameson, my husband and I are all HIV/AIDS volunteers. And my son has lots of wonderful gay uncles.

My mom died in 2002. In lieu of flowers, donations were used to start the Helen Veress-Mitchell Scholarship Fund to help young HIV+ students attend college. The program is run by Capital City AIDS Fund (CCAF) and since has raised and given away nearly two hundred thousand dollars. My mom continues to smile.

As for the controversial meeting where my husband and I first met, after my story aired and activists advocated, the Sacramento City Council finally voted to approve syringe exchange for the region.

No question passion impacts progress. Setbacks are part of the process. But passion can also leave us reveling in the most unexpected surprises.