Watching Stefan Sargent edit a video was like watching a conductor lead an orchestra. All the parts fell into place at just the right time. The finished product was a symphony that carried the audience from start to finish. But that was just part of his talent.

The Media Museum of Northern California has lost a friend and an incredibly talented contributor to our website.  Stefan Sargent, co-producer and post production editor of the museum’s home page “welcome” video, passed away peacefully in April surrounded by family. 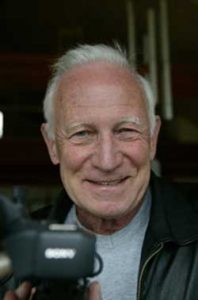 In a broadcast, film and video career that spanned 61 years, Stefan found success on every level and just about every project he was involved with.

Stefan and I met in 2002 while working on a marketing video for a syndicated television show. We were shooting in a TV studio and the crew was busy adjusting the lighting on a set that included green screens, upon which backgrounds would later be added. When Stefan walked in and introduced himself to me I was surprised because he wasn’t scheduled or paid to be there. Stefan’s role was post production. His involvement would come later, as editor of the video about to be shot. When I asked why he showed up, he explained that his job would be much easier and the video would look its best, if he helped with the lighting before we began shooting.

Stefan stayed for the entire shoot, which lasted well into the evening.  He didn’t try to micromanage the work of other professionals but made suggestions that everyone agreed had positive results. I was impressed by his knowledge, professionalism, and commitment to the project.  From that night forward, we were friends. He brought that same attitude to every project we produced together over the years that followed.

Stefan was a master of green screen shooting and editing, just two of his many talents that attracted clients.

Post production with Stefan was exhilarating.  I’d often come up with special effects suggestions or tricky transitions, sometimes just to see his reaction.  I think he liked the challenge. Every so often, he’d look at me, put his forehead down on his desk with a sigh and say “what are you doing? That’s not possible.”  Then he’d work his magic and make it happen. He had a knack for taking something in my imagination and transferring it to the screen.

He was an inventor.  Before anyone heard of drones, Stefan fabricated camera mounts for radio controlled hobby helicopters to which he attached a Flip Cam and later a GoPro camera for aerial shoots.  It cut the expense of actual helicopters and gave our clients a very affordable option. He also designed and constructed a “Pole Cam” to be used in locations where it would be difficult to put a crane. The shots were spectacular. 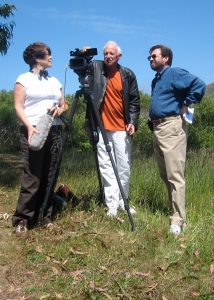 On location: Tricia and Stefan Sargent, with John Catchings

Along with his wife, Tricia, a key member of our team, we travelled the country together working on projects. Our schedule was often grueling but with Stefan it was always creative and fun.

We were in New York to shoot an interview with a top lung cancer researcher in his hospital lab. We had prior approval from everyone involved so we had no reason to expect any problems. While on our way out after the shoot, we were chased down by two angry guards who wanted to know what we were doing with video cameras in the hospital. We told them of our prior approval and explained why we were there.  They weren’t interested and demanded the tape we shot. We were running very late for a flight and didn’t have time to argue. I started to tell them so but before I could finish, and to my horror, Stefan handed them a tape and said “Here…. Let’s go”.  I was stunned but followed his lead. Once we were out on the street, he laughingly reported that he gave them a blank cassette, labelled but completely unused.

On another project in Kern County, we were shooting at a clean energy generation plant to explain how it worked.  The plant burned renewable biomass, wood chips from nearby orchard trees that had outlived their usefulness. Beside the plant were mountain-size piles of wood chips waiting to be dropped on conveyor belts that lead through tubes to the plant where they were converted to steam power. Before we began shooting we attended a safety meeting about what we could and couldn’t do.  We were asked to sign a document listing a full page of “do nots”.

Later, outside the plant, we were fascinated with the massive conveyor belts transporting the wood chips. Stefan suggested we shoot on the belt itself and inside the tubes. Our company guide was hesitant to allow it. Stefan quickly pulled out a copy of the list we’d just signed. “It’s not on the list” he pointed out.  Our guide reluctantly approved the plan. So, Stefan took one of our new HD cameras, connected a cable to it, attached the other end to a video monitor, and placed the camera in the middle of the bouncing chips on the conveyor belt.  Off it went through the tubes on its way to incineration. “Wow, wow, wow”, we shouted as we watched the video monitor. At the last minute, Stefan grabbed the cable and began reeling in the camera. Soon the camera was back, safely in our hands, still intact.

Stefan was also a popular magazine columnist. Little did I know how popular.

His column and photo appeared on the last page of Digital Video Magazine. When he wasn’t reviewing new equipment he often wrote about his production adventures.  One morning we met with a potential client, an art academy, to discuss a project. The meeting was in the area of the building where video production was taught. As we entered and walked to the meeting room, students recognized Stefan from his column photo. He was surprised, cordial, and happy to engage with his readers. The students were excited and in awe to meet and talk with him. I was amazed at his reception.  It was as though a pop star had arrived.

Since 2012 Stefan dedicated his energies to shooting and editing the construction, entirely by volunteers, of the 132-foot Brigantine Schooner Matthew Turner, the first tall ship to be built in the Bay Area in one hundred years.

He finished the final edit of his 3D documentary “We Built A Ship” the week before he died.

As I look back now, I realize more than ever, that Stefan was not just my dear friend, he was indeed a star.

I will miss him.

The Media Museum of Northern California

John Catchings is the NATAS SF/NorCal co-chair of the Media Museum committee. He worked in Bay Area broadcasting and production for over 50 years.