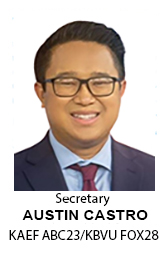 Austin Castro is a multimedia journalist for KAEF ABC 23 in Eureka, California.

He graduated in 2021 from San Francisco State University with a degree in Broadcast and Electronic Communication Arts.

In 2016, he became a correspondent for The Filipino Channel’s “Adobo Nation,” and in 2019 began hosting ”MYX News” reporting on stories about the Filipino-American community.

Prior to joining the North Coast News Team, Austin also served as a Production Assistant at KPIX 5 in San Francisco.

As a huge game show fan, he has also appeared as a contestant on shows such as, ”The Price is Right,” ”Wheel of Fortune,” and “The Late Late Show with James Corden.”

Austin was the recipient of the 2020 Rigo Chacon undergraduate Reporting Scholarship.

In his free time, Austin loves creating content for YouTube and TikTok, and loves telling the stories of the North Coast community!