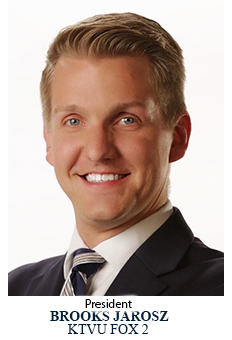 Brooks Jarosz is an Emmy award-winning investigative reporter with a passion to make a difference, spark change and get people talking. He joined KTVU FOX 2 Investigates in September 2017.

Prior to that, he was investigative reporter at WSYX ABC 6 / WTTE FOX 28 News in Columbus, Ohio. While there, his investigative reports lead legislative changes to greater protect Ohio firefighters battling cancer, more flashing lights and speed limits in dozens of school zones, and a statewide review of how county prosecutors and sheriffs spend taxpayer money from various funds after exposing abuse. Jarosz also regularly served as a fill-in anchor and is known for showcasing his work in a creative and engaging way.

A proud honors graduate from the E.W. Scripps School of Journalism at Ohio University, Jarosz got his start at WOUB-TV in Athens, Ohio. He founded and served as executive producer for an in-depth news program. He also anchored and reported there for more than three years.

In 2008, Jarosz earned a prestigious paid fellowship with the Investigative Unit at ABC News in New York City. He contributed to several investigative segments airing on Good Morning America, World News, 20/20 and Nightline.

A Toledo, Ohio native, Jarosz graduated from St. John’s Jesuit High School in 2005, where he got interested in television news, productions and journalism.

He loves rowing, musicals, food and exploring new things. He’s a former member of the Columbus Symphony Chorus. Jarosz also served as the Regional Vice President for the National Academy of Television Arts and Sciences, Ohio Valley Chapter. He’s a former rowing coach, disc jokey and voiceover artist. He has a little dog named Rufus. He has one younger brother who lives in Michigan and his parents still reside in his hometown of Sylvania, Ohio.