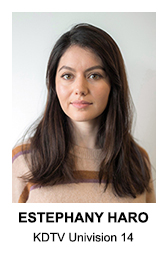 Estephany Haro started her career in broadcast journalism before she graduated college.

She began freelancing at KDTV as an assignment desk during weekends as she was finishing up her journalism major at San Jose State University.

After freelancing for a year she was given the opportunity to join the Univision 14 team with a Producer/writer position.

She lasted a year in that role, then she was promoted to senior news producer. She was able to produce several sweep stories, special newscasts and most recently the devastating Kincade fire. She now holds an Executive Producer role at Univision 14.