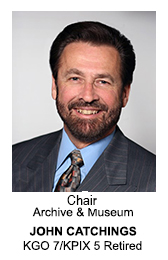 John Catchings is a three-time emmy award winning producer and former broadcast executive with more than 40 years of experience. In 2001 he founded Catchings and Associates, a company focused on video production for nonprofits, government agencies, and corporations.

Catchings spent the previous decade at San Francisco’s KPIX-TV/CBS5 where he supervised all aspects of program development and production as Director of Station Operations, Director of Local Programming and Production, and Executive Producer of Sports Programming.

Catchings was Assignment Editor and Executive Producer of News and Sports at KGO-TV/ABC7 in San Francisco from 1977 to 1990 where he was responsible for daily news and sports coverage and production.  He launched the station’s first morning news program, created its first sports magazine show, and supervised production of five of the stations highest rated specials.

Catchings began his broadcast career in San Francisco at KMPX Radio. He spent seven years at RKO Radio’s KFRC AM/FM before joining ABC O&O KSFX Radio as Director of Programming and Operations in 1972.